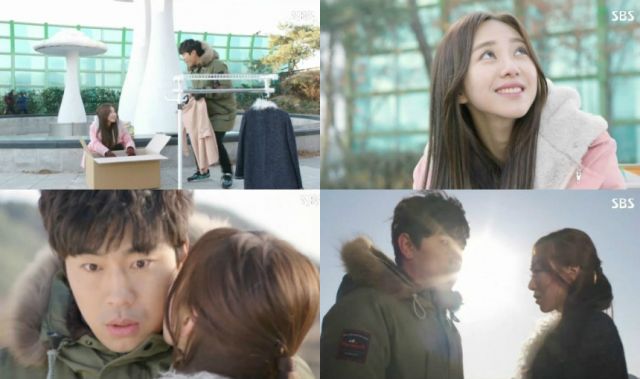 It would appear that the Hyeon-sik conflict has been resolved. I hope I'm wrong about this. But the ending gave me the distinct impression that the purpose of this plot point wasn't to explore the contradictions in Yoon-hee's character so much as it was to provide more fodder for the love triangle. I've never particularly liked the love triangle in "Modern Farmer" and this is one of the reasons for it. Yoon-hee has issues with communication and relationships, and we're not seeing any character growth on this point.

This is particularly strange because the drama certainly spends a lot of time establishing this. Ultimately Yoon-hee's plan to distract herself from Hyeon-sik's presence fails simply because it's so last minute. She hasn't really had time to establish to everyone in the community what a long term boon guest visits can be, so predictably, interpersonal drama ends up wrecking everything.

The jokes are a definite downgrade from last time too. Part of this may be due to personal bias on my part. I hate wasting food, and while there are many good reasons for eating, revenge isn't one of them. The other jokes are so clearly telegraphed in advance that when they finally happen there's not even any real sense of surprise. That's a general problem with the dramatic part of the episode too. If you've seen the preview, you already know every interesting thing that's going to happen here.

The main exception to this is what happens with Han-cheol and Soo-hyeon. It's actually very cute, sweet, and thoughtful. I'd even go so far as to say it's a fuzzier and warmer storyline development than anything we've gotten from the main love triangle lately. The same goes for the adventures of Kang Yeok and Hwa-ran. A romance doesn't need cheap emotional hits to be fun and persuasive.

The general variety in the number of lovelines is the main thing keep this episode of "Modern Farmer" from being genuinely bad, but this is still definitely a low point. I'm not sure writer Kim Ki-ho actually knows how to write catharsis, and given that, I really wish he'd just stick to the situation comedy tropes that make up the main substance of the drama. The sheer quantity of ongoing plotlines alone is enough that I'm not expecting anything to hit particularly hard by the ending. "Modern Farmer" just isn't that kind of drama, and it tends to be at its best when it focused on having fun instead of being super ambitious.