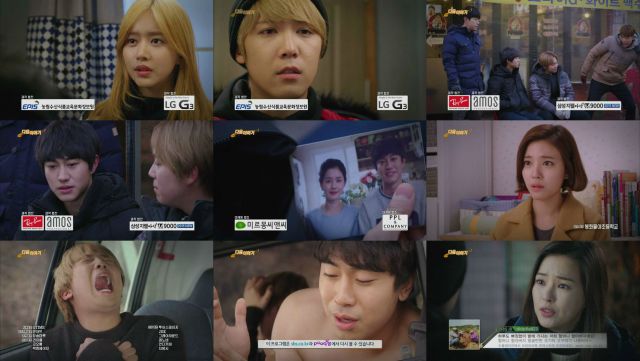 Given that the main characters of "Modern Farmer" have just slipped into major financial difficulties, now doesn't really seem like the best time for these guys to engage in goofball comedy. The entire middle portion here is a plot retread from "Golden Tower", except with substantially higher dramatic stakes. Consequently, what seemed funny in "Golden Tower" just comes off as cruel here, not to mention generally pointless. I really need to note that given all the wiggling they do in the car, it beggars disbelief that they couldn't just open the door and step outside.

The irritating part here is that there's definitely potential for the stakes to be interesting here. Min-gi and crew are later on given the chance to go back to their city lives, and this represents an intriguing dramatic choice. Provided they can get back in the music industry, do they really want to, or would they rather stay on the farm? Well, honestly, given that they can't even handle a single season of market price fluctuation it's difficult to imagine why they would choose the latter.

I suspect that ultimately "Modern Farmer" is going to boil down to a matter of personal pride. I realized to my chagrin here that Min-gi and Yoon-hee actually have very similar problems in terms of character development. They're both unrepentantly proud, but neither are really facing any negative consequences from that. First Yoon-hee deals with the father of her son in a way that makes it impossible for us to see her in an ambiguous light, and now Min-gi is probably going to get mad at Yoo-na for giving him the same kind of material support he insists on giving everyone else.

The way the drama treats Yoo-na at this point is frankly perplexing. She's acting like a villainous interloper, even though her initial appearances on the farm mainly established that Yoo-na is not, in fact, a bad person. For that matter she's never had much chemistry with Min-gi, so I'm not even sure why the woman's been in such a snippy mood lately. Romantic chemistry has never been a strong point in "Modern Farmer" and that's only more obvious now that it's becoming a central plot point.

Other members of the ensemble are hanging around too, but I honestly can't bring myself to care about any of their problems at this point. "Modern Farmer" has spent so much time going over the obstacles of the Sang-dook / Mee-yeon pairing that it's never really explained why we're supposed to want them to get together. There needs to be some sort of catharsis to actually elevate the jokes here from the standard situation comedy level. At present, "Modern Farmer" is just trying to do too many things and failing on all fronts.