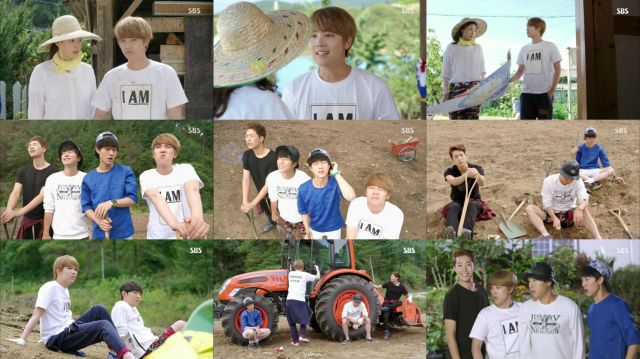 When last we left off, Min-gi (played by Lee Hong-ki) had finally convinced all the old members of the band to team up on his scheme to get rich by farming. This includes Kang Hyeok (played by Park Min-woo), who quite literally showed up at the last minute. At the beginning of this episode Min-gi is clearly agitated by the presence of this interloper, mostly because he hasn't figured out yet that his terrible plan will require as many helpers as he can find.

If the first episode was vague on this point, the second episode of "Modern Farmer" clears everything up. Everybody in the band is really pretty dumb, especially Min-gi. This entire episode is just an extended series of terrible ideas on Min-gi's part that leave a very bad impression with nearly everyone in the community. Yoon-hee (played by Lee Hanee) is one of the few willing to cut him any slack, mostly because she has fond memories of the little kid with an obvious crush on her.

The visuals of this drama are one of the odd points. In motion "Modern Farmer" looks very obviously fake, but going by screencaps alone the special effects frequently look surreal. Director Oh Jin-seok appears to have very quickly realized what his strengths and weaknesses are in shooting this kind of comedy, because by the end we don't even get an action scene at all. Just a bunch of stills that probably tell the story better than more traditional television reasonably could.

More importantly, though, I actually did start to feel a little sorry for the idol band here. Min-gi's discovery of Yoon-hee's current lot in life is particularly apt. Whereas Min-gi has been mostly insulated from the real world due to his career as an idol, Yoon-hee has managed to go through a major life cycle. Whether she's actually any more grown up than him is, well, ambiguous. It's a mild point of confusion how old the characters are supposed to be here- I'm assuming late twenties based on context but it's hard to say.

In any event, not only have Min-gi and friends managed to destroy everything and realize that they don't actually have much of a plan, they've also clearly figured out by now that this is the case. I imagine we're not going to see as much of their arrogant attitude in the future. It remains to be seen, though, why any of them are willing to stay at the farm at all when they've already run in to this much trouble.