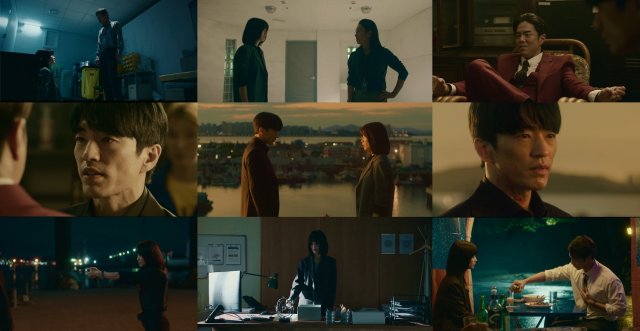 So in the climax of the first episode we learned what the titular moebius actually is- some sort of weapon of mass destruction, the sale of which is being disguised as a drug deal. Why was anyone even making that? Well, it's not really important. Just know that the Russians and the North Koreans want it. Probably China too, but "Moebius Project 2012: The Veil" mostly got its fill of anti-Chinese xenophobia out of the way last episode so there's no need to bring them up here.

I can't see "Moebius Project 2012: The Veil" as much more than the usual slick capitalist national security propaganda. Yes, the National Intelligence Service isn't really portrayed well. Our reporter turned spy heroine Soo-yeon runs into comical issues of miscommunication and political jockeying among her superiors. The entire reason that Cheon-woo is such a wild card in the arms deal is because neither he, nor Soo-yeon, really trusts that he'll be allowed to come in from the cold.

And really, considering the huge farce that is the moebius deal, I.M fairly certain the whole sordid scheme would have collapsed on its own somehow. There are a whole lot of betrayals by a whole lot of characters with very thinly drawn personalities, most of whom end up dead. I couldn't bring myself to care very much, since aside from our two leads just about everyone in the story just exists on the same vague spectrum of mostly unsympathetic.

The production values remain very solid. Director Wi Geuk-yoo makes very good use of empty foreboding space. The intense, if brutal fight scenes are well-choreographed, and it's easy to tell what's going on. The continuity is also all right- or at least good enough I.M chalking my dislike of the drama more to the genre than due to anything wrong with this particular iteration of it. With ratings in the 3% range, "Moebius Project 2012: The Veil" did well enough as far as short dramas go.