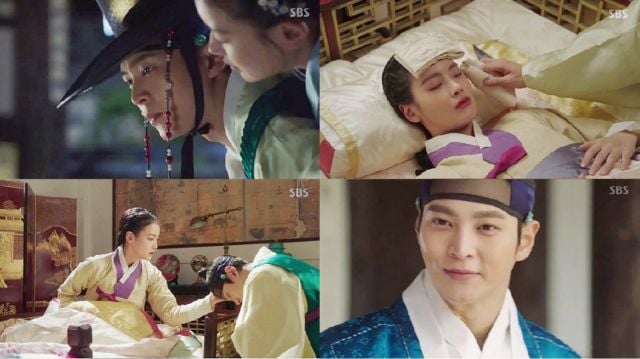 It was only with these episodes that I noticed that the parents of the lead characters are also the principles in the related royal conspiracy plotline, and the parallels are noteworthy. King Huizong, like Princess Hyemyeong, is oblivious to the real threat facing the royal family, only seeing the surface level. Gi-joon, like Da-yeon, is very good at seeming nice and helpful when in fact his every action is mean-spirited and destructive. Pil-yeong (played by Jo Hee-bong), like Woo, is a smart guy with a good reputation who is struggling to figure out how deep this rabbit hole goes.

Incidentally I only realized upon looking up Pil-yeong's character information that Gyeon is actually Woo's surname, so I'll just be calling him Woo from now on. Likewise, the character formerly known as Gyeon-hee will now be referred to as Hee in my reviews. And hey, there's a good parallel too. Hee, like her mother is both judgmental and overly nosy. Normally this combination would just be annoying, but it makes both mother and daughter perfect foils to Princess Hyemyeong, who's mostly trying to mind her own business.

Unfortunately for Princess Hyemyeong, there is no stealthy way to act as a royal houseguest, and that's where most of the humor comes from. Princess Hyemyeong also struggles with expressing sincere gratitude, because Woo has finally managed to do Princess Hyemyeong a favor in a way that gave him no personal benefit and in fact proved to be a great inconvenience. Of course, the real highlight ends up being how the imaginary Princess Hyemyeong in Woo's head responds to this unexpected humility.

The jokes are funny and the characterization on-point. My main quibble at the moment is how, even with the parent-child parallels clearly established, and even with the parents and children openly discussing their options...there's still not much movement in connecting the royal conspiracy with Woo and Princess Hyemyeong's romance. The most frustrating part is the cliffhanger to episode eleven, which receives no follow-up in episode twelve.

Still, "My Sassy Girl - Drama" is at least managing to instill in me a growing sense of optimism, which is a welcome reprieve after some of the drama's more repetive and annoying bits. The overall production is well-polished enough it's quite hard to dislike it. Take the fusion music design. While "My Sassy Girl - Drama" has the soundtrack of a standard romantic comedy, the use of traditional instruments to make the music is great for setting the tone.