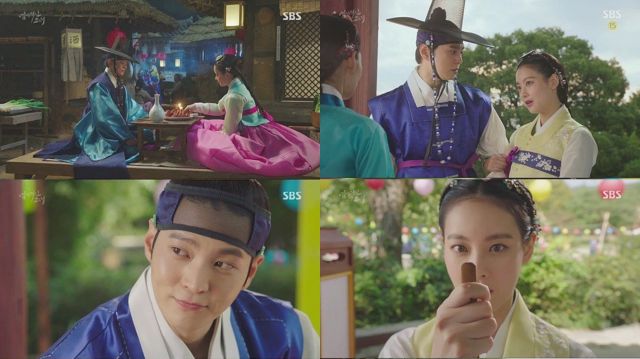 The opening of the fifth episode is an extended replay of the last scene of the fourth episode- and it really is a perfect example of how good editing can turn a borderline unwatchable sequence into a genuinely entertaining one. We get a lot more exposition about why the pawnbroker is a bad dude who got what was coming to him. More importantly, Princess Hyemyeong gets some badly needed positive personality traits. She made the mess here, not as a consequence of her being a fickle psychotic, but out of a genuine concern for justice.

The following scene continues that streak with Princess Hyemyeong bullying Gyeon-woo into trying new, delicious food that he would normally turn up his nose at. That dynamic is my favorite part of their relationship- how Princess Hyemyeong is more in touch with low class attitudes even though she's the Princess. Then there's the basic personality clash. Gyeon-woo has built himself up as this epic scholar. He's loathe to demean himself publically by behaving in a way that is not awesome and cool.

Elsewhere, Da-yeon gets some negative character traits, which makes it easier to root against her. The funny part is that Da-yeon really is just a feminine version of Gyeon-woo. She thinks of herself as being superior to everyone in looks, temperament, and intelligence, and uses this as a justification to talk down to people. Da-yeon is nice to Gyeon-woo mainly because she sees him as an equal worthy of her attention. But even then, she's making transparent attempts to manipulate him.

Gyeon-hee (played by Jung Da-bin) typifies this well as Gyeon-woo's sister, who so obviously desperately wants to enter into the higher echelons of Da-yeon's social clique. In trying to achieve this goal, Gyeon-hee frequently comes off as very annoying and pesky. Working from this standpoint, I can see why Gyeon-woo has more of a sincere interest in Princess Hyemyeong. Royal title notwithstanding, Princess Hyemyeong clearly does not care what anyone thinks of her.

Well, she does care about what Gyeon-woo thinks just not in that way. I rather liked her disgusted look at him during the dinner scene. Yes, this pair of episodes did manage to put me in a better mood almost immediately simply by having Oh Yeon-seo show a wider variety of expressions. That is her main talent, after all, is that fantastically expressive way. Ah, how it was wasted on that endless search for the ring...