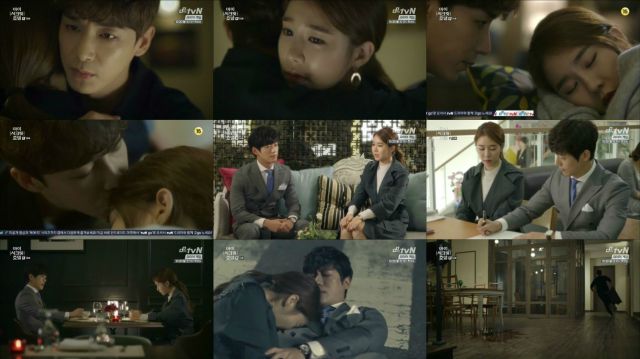 So Hae-yeong finally seems to be making some significant character development. Unfortunately, this character development basically involves him realizing that he's been a bit of a pig about bullying Sang-hyo into keeping up the whole marriage facade, but the marriage facade itself is the only reason these two ever have any reason to spend time together, so of course she has to talk him into keeping it up just a little while longer.

Also in line with this new character development- rather than Hae-yeong himself coming up with the scheme to get closer to Sang-hyo, his colleagues end up coming with that. And for what it's worth, Hae-yeong is very hesitant about going along with the scheme, and unsurprisingly agrees to sabotage it as soon as the opportunity arises. It's a sweet reversal really- turnabout is fair play after all.

The trouble here is that these are still baby steps toward Hae-yeong becoming a good person. This really should have been the focus right after Seong-gyeom's singing. In fact, I'm not at all sure why it couldn't have been. Frankly speaking, "My Secret Hotel" hasn't done anything particularly interesting or relevant in between now and that fairly effective cliffhanger from several episodes. It remains a point of frustration that even though Seong-gyeom "won", since then, he's spent almost no time with Sang-hyo.

Action wise too we get more development here on the murder storyline that we have in the past several episodes put together. It's finally confirmed, beyond all reasonable doubt, that even characters we've been led to believe are mostly decent people have had some hand to play in all this, though the true extent of their involvement remains unclear. I really do wish all of this had come up sooner- lots of interesting questions are begged here and I'm not sure they can be answered all that convincingly in what little time remains.

In any case, ignoring the lingering question of time constraints, this still manages to be a pretty decent episode that achieves an effective balance of the various drama molds that make up the basic concept of "My Secret Hotel". It's just another one of those awkward cases of this being a good punchline to a bunch of plot points that we never actually got to see. Still, enough is clearly set up here that we'll probably get the last few significant relations in the final episode with no real trouble.