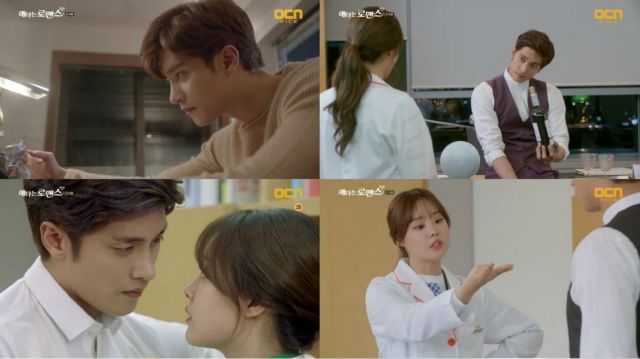 So even though we saw Yoo-mi fantasizing about meeting Jin-wook by chance again last episode, this time, Yoo-mi is doing everything she can to avoid the reality of the situation. Which makes sense. Let's recall that, three years ago, Jin-wook was kind of a jerk, and that they were both just a tad drunk. So it's easy to empathize with Yoo-mi viewing Jin-wook's dictatorial demands here as being part and parcel of a mean personality rather than an overbearing effort on his part to be cute.

And indeed, it would be a little remiss for us to completely ignore the power imbalance here. Jin-wook is Yoo-mi's boss, and his attempt to jump start a relationship with her here is textbook sexual harassment. For all that, it's hard to hate Jin-wook that much when we can see from his perspective that Yoo-mi was his one moment of genuine empathy. Unless we count the cat, who sadly does not feature here. I was kind of hoping the cat would be a regular character.

Instead we get Hyeon-tae (played by Kim Jae-young) who is in the akwward position of being Yoo-mi's only apparent girlfriend...when he is not actually a girl. Hyeon-tae is understandably less than helpful when Yoo-mi attempts to vent frustrations about the inherent creepiness of Jin-wook's romantic overtures. It's a little odd how Hyeon-tae's placement in the story implies that he is Jin-wook's main rival for Yoo-mi's affections, yet so far, he isn't really acting like it.

Note that effort alone does not an effective rival make. That's the problem which faces Jin-wook's suitor Hye-ri (played by Jung Da-sol) whose aggressiveness is a bit of a turn off. Interestingly, Hye-ri attitude toward Jin-wook comes off as quite a bit more rapey than Jin-wook's attitude toward Yoo-mi even though there's no power deferential. A lot of this just has to do with the sensation of touch. Hye-ri will never leave Jin-wook alone, whereas Jin-wook limits his harassment to requests that could reasonably be expected of Yoo-mi's job.

Bear in mind that these are all genre standards rather than anything which can reasonably be said to be a special quality of "My Secret Romance" alone. Consider the parents of the lead characters, who have had less than successful love lives. So it is too that Jin-wook is trying to avoid stoic formula while Yoo-mi is trying to avoid fickle passion. These two will have to meet in the middle at some yet undetermined point.