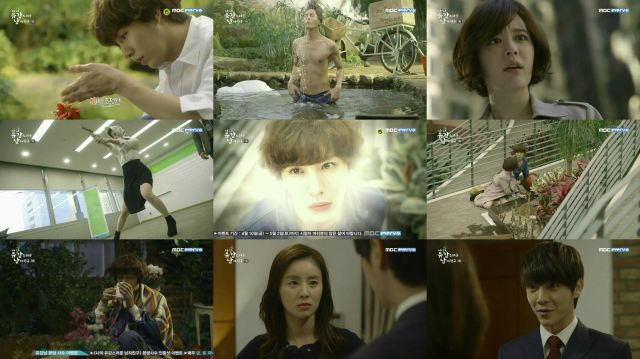 Tae-woon (played by No Min-woo) is a somewhat mentally challenged gardener with an outrageously hot body and a powerful love of all living things- including plants. I wasn't expecting "My Unfortunate Boyfriend" to invoke the fairy tale of Thumbelina, of all things, but OK, sure. Let's consider the more important questions. Is Tae-woon likable? Is he funny? Do I laugh at his antics while still realizing somewhat shamefacedly that Tae-woon is a much better man than I could ever possibly hope to be? The answers to those questions are, naturally, all a resounding yes.

Maybe it's just the general absurdity of the backdrop. Even though Tae-woon is the obvious star of the show, the action is actually driven by Ji-na (played by Yang Jin-sung). She's a fiercely independent woman who's determined to succeed in the modern world. Ji-na is repulsed by Tae-woon's obsession with dirt and cleanliness. And yet Ji-na also desperately needs Tae-woon's childlike nature in order to accomplish her own ambitious off-the-cuff employment schemes.

"My Unfortunate Boyfriend" excellently balances the surreality of Tae-woon's character with the reality of Ji-na's world. Ji-na is very good at reacting quickly in crisis situations. She's not so good at long-term empathy. While Ji-na's job interview is inevitably successful, the impulsive choices she made during that process quickly set up the drama's remaining conflict. The humor in the drama mainly comes from Jina's unpredictable short-term actions coupled with Tae-woon's unfortunate long-term reactions.

But this isn't just a two-person show. Second leads Hee-cheol (played by Jung Yoon-hak) and Hye-mi (played by Han Tae-rin) also quickly establish their basic personalities and conflicts, and it's easy to see how they too, are the major obstacles that Ji-na will have to outwit time and time again even though neither one of them are really villainous in any way. Another honorable mention goes to Park Jin-joo, who stars as Ji-na's best friend. She really loves cosplay. That's the joke.

There's just something so refreshingly unpretentious about the production design of "My Unfortunate Boyfriend". Writer Lee Jae-yoon-IV has rather confidently put together a script that doesn't waste any time promising potential story developments. This woman well appreciates that the people want to see No Min-woo take his shirt off, and they want to see this happen as quickly as possible. The only apparent weakness I can see in this drama is that the acting isn't quite up-to-snuff- but who cares? Do you want to laugh or do you want to nitpick?