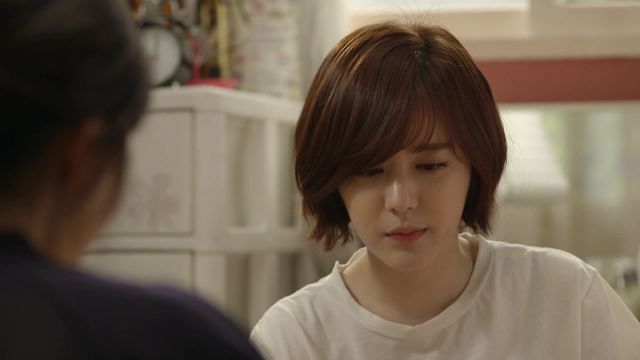 Avoid the preview for the last episode if you can- unfortunately it spoils everything about this episode, including the cliffhanger. This isn't a huge problem, given the general appeal of the characters. It's just a little annoying to have go through an entire episode's runtime without actually learning much in the way of new information. Well, relevant information anyway. As I've noted in the past, the plot in "My Unfortunate Boyfriend" is somewhat weak.

But then, what would you rather see- an overly complicated and self-interested plot, or Ji-na just being Ji-na? I especially love the extended chat with Ji-na's roommate this episode- and it's not just because Park Jin-joo is super-cute. The whole scene establishes that Ji-na doesn't live in a vacuum. She lives in a universe where people do love her and aren't afraid to show it, even if Ji-na sometimes feels ashamed about her identity.

It's such a wild contrast to Tae-woon, who knows exactly who he is and doesn't have enough self-awareness to really question it. The main pity here is that we don't get to see them interact. Tae-woon quite literally spends most of the episode huddled behind a counter. This might be annoying except that, again, "My Unfortunate Boyfriend" is more about characters and background than it is about an actual story.

Take what's going on the workplace right now. Hye-mi has gained the upper hand in terms of the challenges- and Ji-na is so preoccupied with these personal issues that she's barely even able to pay attention to the rivalry. By contrast, Hye-mi is now so totally self-confident that she makes her move on Hee-cheol without even waiting to see if he can give her a definite answer. This emotional honesty is one of the bigger strengths of "My Unfortunate Boyfriend"- even if most of the characters know exactly what they want, this isn't necessarily helpful information. So Ji-na struggling in the face of this takes on an even deeper context.

I can't really overstate just how pleasant this drama is. "My Unfortunate Boyfriend" is, above all else, a very confident production. Director Nam Gi-hoon has so much faith in the script of Lee Jae-yoon-IV and the charisma of the actors that there really isn't any need right now to resort to more elaborate dramatic tricks here. We're just watching these people struggle with their feelings, try to talk them out, and hope that they're able to succeed.