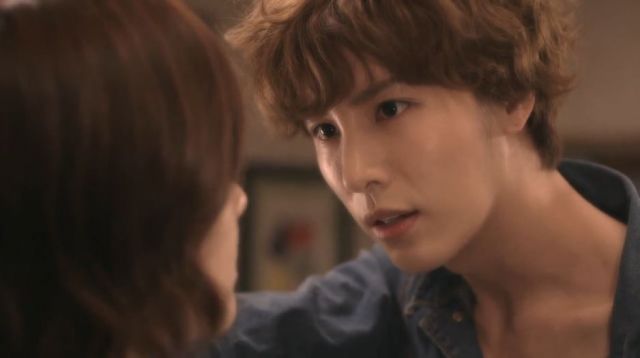 Tae-woon really is just infectiously adorable. He doesn't even seem to have it in him to be pessimistic. When Hye-mi ruins his big exciting event date with Ji-na, Tae-woon's response is to simply explain to Hye-mi in elaborate detail every single detail of the event. Tae-woon is super upbeat because he put a lot of effort into planning this, and to him, that's the fun part. Putting in the effort. The fact that Ji-na didn't actually show up is sort of besides the point, because Tae-woon is that sure she'll have an explanation.

Ji-na, for her part, continues to be surprisingly compelling. Nearly any time a woman skips out on a promise with man, we'd see the woman in a negative light. But Ji-na is just so ambivalent. She knows as a point of fact that getting Hee-cheol's romantic attention has been her goal this entire time. And now that Ji-na can have it the question is inevitable- is this the person who she wants to be? A woman who's willing to break her promises to get what she wants?

It's a compelling conflict mainly because it's just so straightforward. There's not any complicated plot running around in the background- at least as far as Ji-na knows. We finally get some heavy exposition about character backstory from the previous generation, and a lot of this information is tough to process. It's possible that for these reasons the Tae-woon / Ji-na loveline isn't fated to go anywhere anyway. Yet should any of that really matter?

I look at Tae-woon's face during his explanations, and it's hard to ignore how happy he is. I look at Ji-na's face, and it's unmistakable that this is a woman who's capable of admitting her mistakes. Ji-na needs Tae-woon precisely because he inspires her to do better. Ji-na knows that she's capable of being a terrible person if her inhibitions aren't kept in check. And with Tae-woon, Ji-na has a partner that she can't let down. It's like being mean to an adorable puppy.

The comedy elements are also quite well-integrated. An awkward stand-off ends up being defused by the impromptu arrival of other characters who aren't very good at detecting the social malaise hanging in the air, and quickly try to make themselves helpful in inadvertently unhelpful ways. A fantasy scene is not only absurd- it also excellently explores Ji-na's id. Even though this episode takes place over a single night, there's a lot going on here, and most of it is quite well done.