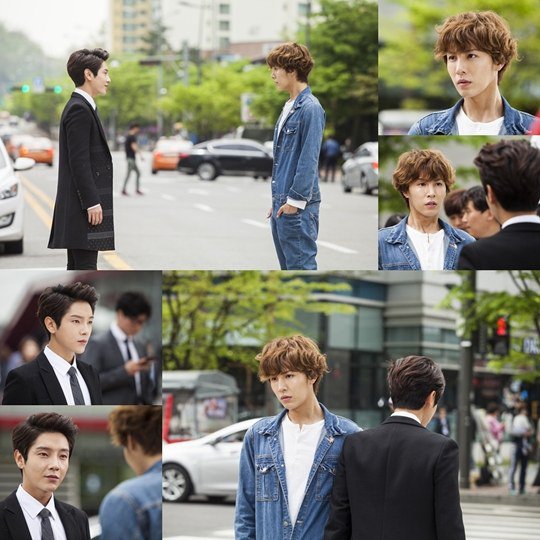 This episode doesn't have much in the way of interaction, be it direct or indirect, between Tae-woon and Ji-na. So I don't have much choice except to address the main weakness of "My Unfortunate Boyfriend"- its rather light storyline. Frequently I find myself forgetting what the conflict is even supposed to be. Aside from the lovelines this is just a corporate plot with little to no urgency. It's odd how even though the stakes are higher with Tae-woon and Hee-cheol, the relationship as a whole feels a lot less important than the one between Ji-na and Hye-mi

The main culprit in that department is the lack of effective rival chemistry between our male leads. No Min-woo and Jung Yoon-hak just don't seem to dislike each other enough. This is mainly because the actors lack a very broad range. They're good in the character-centered roles they do, but building up a serious boardroom battle requires a sense of aggressive flair. I can't picture Tae-woon and Hee-cheol fighting each other because they're just not forceful enough.

Even added motivation doesn't help much. Hye-mi pulls off the usual scheming second lead stunt although...well, even though Hye-mi mostly says what her goal is I'm still not really feeling the urgency. That's the problem with having characters who are genuinely passive and thoughtful. They're not very good at actually managing to instigate action in a very convincing way.

The thematic consistency this episode is somewhat interesting, at least. We see several instances of people moving around their stuff to new permanent locations, either by force or persuasion. At first this just seems like coincidence. But in broader perspective, and especially in the last scene, we see that this moving is symbolic of character growth and how these people have to go to a new place in their lives, because that's what life is- constant movement forward.

That much is a nice enough idea, although I'm not really sure "My Unfortunate Boyfriend" sells it that well. I've never been terribly interested in the character backstory except to the extent that it emphasizes current character conflicts- that is, internal emotional conflicts. Ji-na has the least exciting backstory, but the fact that her backstory leads to her current mixed emotions and feelings of inferiority are such that I like seeing what happened to her in the past. With Tae-woon and Hee-cheol...well, it's just the usual corporate Family Secrets. It's not necessarily bad, but it's nothing special either.