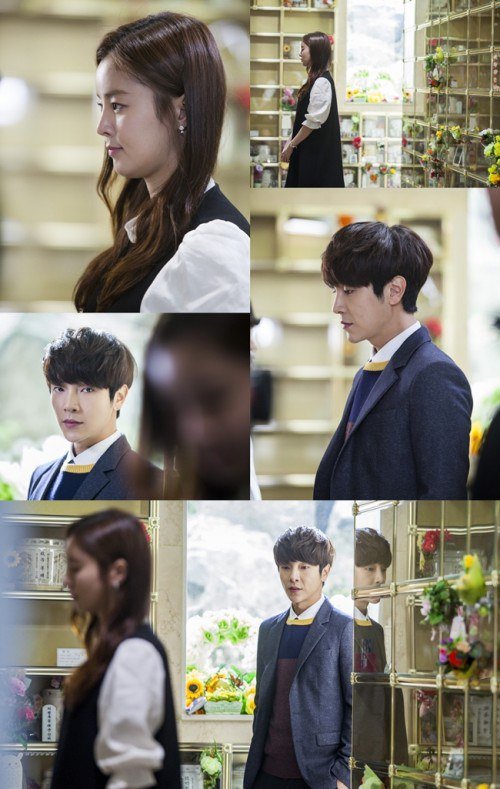 Looking back I think I may have misjudged where "My Unfortunate Boyfriend" is going. The current narrative thrust is less about an actual confrontation between Tae-woon and Hee-cheol and more about catharsis as all the characters come to terms with their responsibilities, and what their decisions have to do with their future. What's happening in their professional lives is almost entirely incidental to how these storyline movements affect them on the personal level.

It's a very appropriate contrast, really. Let's take Hye-mi as an example. For her, work has only ever been a very roundabout way of trying to impress Hee-cheol. But it's not until episode that Hee-cheol himself realizes that for Hye-mi, Hee-cheol is a lot more than just a childish crush. Hye-mi's emotional feelings in this regard are wrapped up in her backstory, which isn't a tragedy so much as it is something that Hye-mi has had to move past to get on with life.

Tae-woon and Hye-mi both have had very discouraging backstories, yet it's often easy to forget that for the most part they've managed to recover. What they long for still is just family, because these aren't super long-past events. Tae-woon and Hye-mi can remember having loving parents, and even if that coil has been separated, in the present day this has given them something to aspire to- just having a person they can care about.

I think this is the real reason why, in the end, the Ji-na and Hee-cheol pairing just can't work out. Ji-na has been trying to run away fromher family for reasons that aren't particularly noble, and she knows they aren't particularly noble. Even if Hee-cheol represents the fantasy any girl would want, well, why should Ji-na want that? Her character journey has been realizing that she doesn't really want the things that she wants. And Hee-cheol comes to the same reluctant conclusion- that his professed lack of interest in Hye-miis largely a matter of self-perception.

The characterization in "My Unfortunate Boyfriend" is and has always been quite strong. It's a rare feat for a drama to present all four of its leads in a mostly sympathetic lead, with decisions being made on the back of focused deliberation rather than deliberate malice. Even if the plot falters somewhat, there's a sort of kindness at heart in the character actions that makes them pleasant people to watch and root for. I've probably written that before, but that's just the sort of drama "My Unfortunate Boyfriend" is. No gimmicks- just heart.