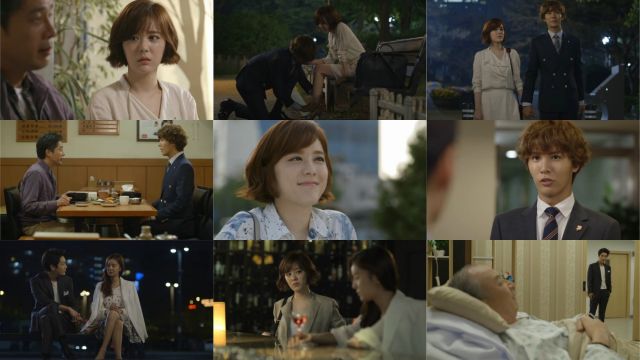 The lack of an actual conflict is getting to be...well, not necessarily bad, but it's kind of messing around with my perceptions of how to evaluate "My Unfortunate Boyfriend" as a drama. There's really just not much actual drama here. As expected, the situation with Ji-na's father is cleared up simply by having Ji-na explain the situation. And after that, there's not even much in the way of obvious tension, because everything mostly goes along all right.

This is, additionally, a fairly obvious and explicit theme. The closest thing we get to a setpiece is when Tae-woon and Ji-na need to cross a road in the middle of the night. At first blush, Ji-na's interpretation of the situation appears to be the correct one. Logically speaking of course nothing bad will happen. Yet Tae-woon's point is more important if only for the subtle implications- why, exactly, has Ji-na always been in a hurry to go everywhere and do everything?

Think back to the earlier portions of the drama. Hurry up Ji-na may have been good at her work, but was that because she was moving quickly, or just a function of Ji-na's own general competence regardless of the actual nature of the situation? If we look at Ji-na's behavior here it's obvious that she's gained quite a bit of self-confidence throughout this drama. And it's not because Ji-na has achieved incredible feats so much as she's just taken a minute to slow down. What kind of person does Ji-na really want to be?

This eventually leads into the very light, late hook of Ji-na's accidental deception from way back when being discovered. Yet once again there's little dramatic urgency. Even though the context initially makes the revelation seem like a threat, Ji-na is quickly reassured that this is not the case. The matter's just, looking back, Ji-na's not the person who did that anymore. Ji-na's not scared of being found out, because the woman is at this point fine with who she is.

That's the emotional thrust "My Unfortunate Boyfriend" is going for that ultimately makes Tae-woon's huge compliment to Ji-na so huge, even though it initially comes off as insulting. "My Unfortunate Boyfriend" has turned into a romantic comedy that eschews a lot of the more elaborate trappings of the romantic comedy genre. There's no bombastic theatrics, just kindness and understanding. That doesn't seem like a lot to expect from a romantic partner, but really, anyone who cana chieve that much really has found a treasure.