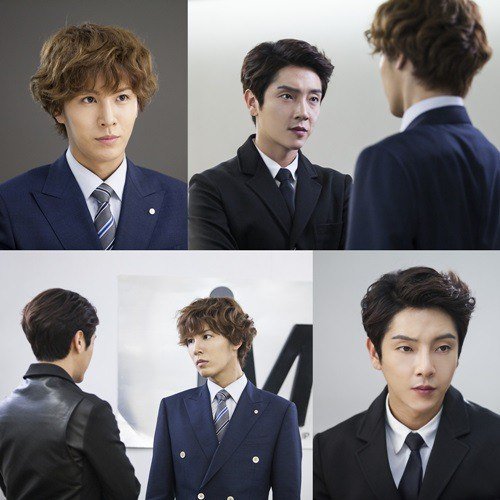 The final episode opens up with a final board meeting to end them all. As usual the lack of serious dramatic urgency is palpable. Hee-cheol doesn't actually seem to know what he wants. Which is of course the entire point. Even if at times Hee-cheol has tried to play the villain here he's forced to realize that picking fights just isn't that much fun in the long term. And so, with a slump to his knees, that pretty much does it for the last character arc.

One of the strong points of "My Unfortunate Boyfriend" is, somewhat paradoxically, that even the weak points are elevated by the situations. I've never really been that impressed with the acting in this drama beyond rudimentary roles- but it's very easy to empathize with these people, whatever the skill level of the performers, when the theme is something as universal as grief over the passing of a loved one. For Hee-cheol, it's this late reassurance that finally makes him appreciate that it he's working for trust and confidence more than a paycheck.

Similarly sweet is the indirect exchange between Tae-woon and Ji-na regarding their feelings. Note how the letters aren't really love letters in terms of content- Tae-woon and Ji-na are principally discussing who they are and how they relate to each other. It's an extremely thoughtful, personal gesture that aptly explains why Ji-na has been mostly nonplussed by her apparent exposure. In the end, Ji-na too wants more than just work prestige.

Even if the acting hasn't been award-winning, "My Unfortunate Boyfriend" has always had a tremendous amount of heart and that's especially overflowing here. No Min-woo has always done excellent work selling Tae-woo as a person who tries to avoid being complicated, and mostly succeeds. Even if, as Ji-na's final voiceover demonstrates, Tae-woon is a rather unfortunate boyfriend, there are more important things in the world than just being suave.

"My Unfortunate Boyfriend" isn't a standard romantic comedy- the longer the drama went on the less it relied on staple genre tropes. This might be a bit of a disappointment to those wanting something more standard, but for me the that's been the main appeal of the characters. Episode by episode I really just wanted things to work out because Tae-woon, and by eventual extension everyone else, deserved a happy ending for being such a kind thoughtful person. That's not a traditional fantasy, but it's one I enjoyed tuning into throughout this drama's run.