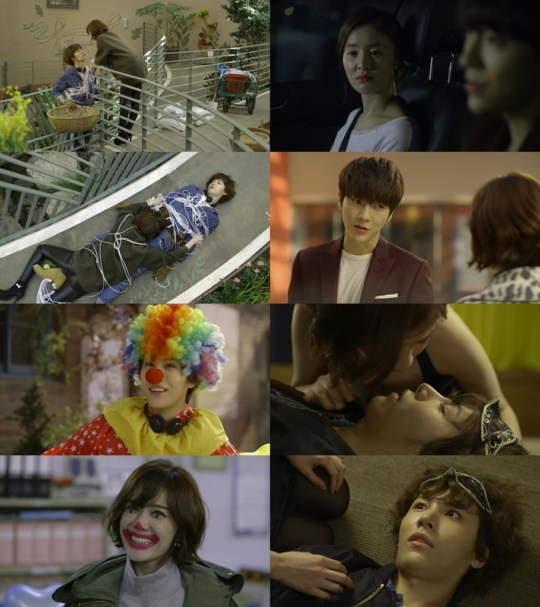 I really love the aesthetic look in "My Unfortunate Boyfriend". I can't quite remember the last time a drama was quite this colorful- both literally and metaphorically. Director Nam Gi-hoon doesn't just settle for telling us that Tae-woon loves gardening. He lovingly shows up both a home that looks like an aviary and a workplace so utterly overflowing with greenery that it's easy to see why they need to keep a gardener on permanent staff. What's more, the visuals really sell the general absurdity of the drama's moral points- like why you should always listen to persistent clowns.

What's particularly impressive is the way "My Unfortunate Boyfriend" is able to stretch out these slow-motion action sequences without ever making them seem repetitive in any way. Ji-na is very good at solving problems- but only when she's aware that a problem exists in the first place. The woman has a very narrow field of vision. While this is good for creative stuff and crisis situations, it's inevitable that Ji-na ends up creating as many problems as she solves.

Other compliments are well-deserved in the make-up department for making all the actors involved look so attractive. Well, obviously these people were all reasonably attractive to begin with, but it really helps bring out the fluffy fun in the drama to have such beautiful people go through such comical mishaps. This is a very fundamental building block of comedy- jokes are funnier if the person suffering from them has some sort of inherent dignity.

It's what makes Ji-na's character so fun, just as an example. She has pretensions of doing the independent woman thing and taking the world by storm. What's more, Ji-na definitely has the skills necessary to go through with this. What Ji-na lacks is the proper background, or the confidence necessary to act properly without the help of an adrenaline rush. Ji-na's cover-ups are inevitably pointless precisely because she's so bad at proper diplomacy.

This gives Ji-na's budding relationship with Tae-woon a fabulous bite- they work well together because he just does whatever she tells him to out of his unfortunately good-natured personality. But rather than being a proper servant, Tae-woon inevitably has to act in the way that he feels is right- with hilarious consequences because both Tae-woon and Ji-na are trapped in an elaborate whirlpool of chaos. The second episode of "My Unfortunate Boyfriend" continues all the strengths of the first one and then some, making for a very promising start to a very efficient romantic comedy.