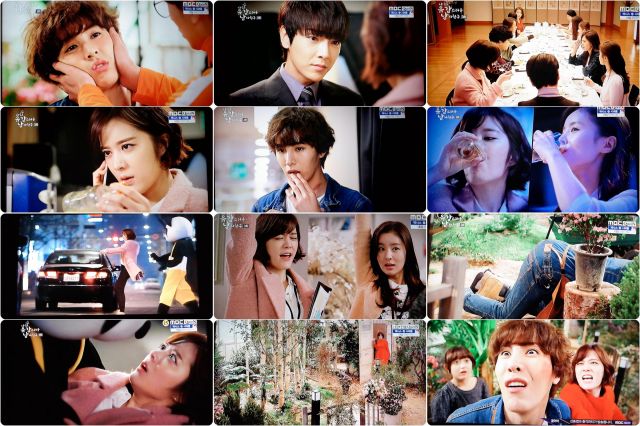 This episode lacks the frantic energy of the first two- not necessarily a bad thing considering how ridiculous the situations have been lately. Here it's mostly just a night and day of recovery. Ji-na once again shows off that her real magic trick is being able to improvise solutions that looks so impressive and pre-planned that it never occurs to anyone that she's just making it up as she goes along. Unfortunately her talent only really works in the presence of a crisis situation- and all Hee-cheol wants is a drink.

I do like Hee-cheol. Even though he's obviously the focal point for a romantic rivalry Jung Yoon-hak keeps oscillating between whether Hee-cheol doesn't know or doesn't care that Ji-na and Hye-mi are fighting over him. And in actuality "My Unfortunate Boyfriend" is really just pushing toward a very obvious moral point- that you can't impress an attractive guy by drinking lots of beer. You might get a slob that way but Hee-cheol has too much class to entertain those kinds of shenanigans.

But poor Tae-woon...he's completely flustered by Ji-na and the man really doesn't know why. Neither does Ji-na. In her defense, most of their interactions this episode take place while he's literally in disguise. All the same the cliffhanger seems just a tad harsh in terms of Ji-na jumping to conclusions at Tae-woon's expense. I want to like Ji-na- she's a rough person, but not necessarily a bad one. Even so Tae-woon can only suffer so much before I start thinking that she's just plain mean.

The edge is mostly taken off by the generally lovelorn proceedings. Strictly speaking "My Unfortunate Boyfriend" is a fairly clichéd romantic comedy, but there really are times when I'm more interested in things looking cute than by their necessarily being original. The fact that Ji-na is too constantly distracted to realize that the universe is conspiring to put her and Tae-woon together only makes their interactions that much more fun.

It's a silly thing to complain about but I was really hoping that Park Jin-joo would wear another elaborate cosplay this episode. Ho hum. This weakness notwithstanding "My Unfortunate Boyfriend" is still doing well enough quality-wise that until the cliffhanger I hadn't noticed that Ji-na hasn't actually visited the arboreteum yet. Usually I'm a bit of a hawk for figuring out when a drama gets around to clearly establishing its premise. If nothing else "My Unfortunate Boyfriend" gets points for being intense enough to keep my mind from wandering.