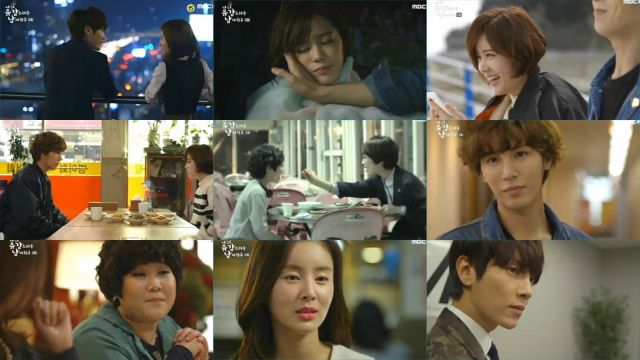 The pace here is even slower than usual as most of the episode is simply dedicated to a long, awkward car ride between Tae-woon and Ji-na that somewhat predictably ends up with things going wrong because Tae-woon takes her instructions too literally. I've been a good sport about Tae-woon's slowness so far, but really, after a certain point it gets to be kind of contrived. Particularly since Tae-woon is evidently much smarter than he lets on.

I'm not turning against "My Unfortunate Boyfriend" or anything, but so far the absurdities of the plot have mostly been excusable by the absurdities of the presentation. And here we don't really have any particularly exciting visuals. The drama has veered far enough away from serious realism that Ji-na's kerfuffle at work doesn't really inspire much dramatic tension. Although somewhat relievingly, we do get a preview that indicates the next episode will be more goal-driven than this one.

Some meek moments of character development achieve some success. Hye-mi continues to be an unusually sympathetic second female lead- Hee-cheol quite literally thinks of her as a sister, and it's in this capacity that he reacts to general family problems. The general elation Hye-mi feels at him wanting to spend time with her is inevitavly deflated by the fact that he trusts her judgment- as a sister. There's no obvious path for Hye-mi to become more than that.

By contrast, Ji-na could conceivably get involved with Hee-cheol romantically. From that end the problem is that Hee-cheol doesn't seem to be romantically interested in anyone right now. And, of course, the fact that we're supposed to want Ji-na to get together with Tae-woon. But that's the trouble with a softer, more introspective episode that doesn't really get into impressive character depth. So far I'm not seeing any real reason why we should want Ji-na to get together with Tae-woon. While they have good comedic chemistry, that's not the same as romantic chemistry.

"My Unfortunate Boyfriend" has been such a strong drama to date that it's possible I'm being a little harsh. The comedic highs are so high that anything which takes a step away from that will inevitably seem like a downgrade in quality. But even if the production team is having a bit of a hiccup right now the cast remains quite strong, and there are enough scattered laughs here that I'm not too worried just yet.

"My Unfortunate Boyfriend" is directed by Nam Gi-hoon, written by Lee Jae-yoon-IV and features No Min-woo, Yang Jin-sung, Jung Yoon-hak and Han Tae-rin.,