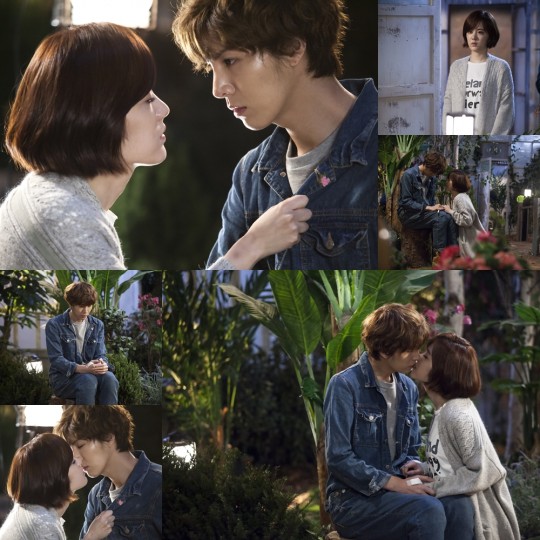 The pacing slows down even more than usual here as quite a bit of the material is just Ji-na and Tae-woon trying to make the most of an unfortunate stranded situation. And it's really cute. From the very start a peeved Ji-na just tells Tae-woon to stop trying to be helpful while she takes a moment to calm down. He still ends up trying to be helpful, just not in an overbearing way. As it turns out, that's exactly what Ji-na needs- a chance to relax and realize the crisis isn't as bad as it seems.

One of the parts of the romance here that I really like is the extent to which we just see Ji-na and Tae-woon getting along with each other. Love isn't just the highly planned fluttery moments- it's being able to survive in an unexpected situation. Again and again Ji-na is thrown into difficult straits, but always manages to come out ahead. It's a natural consequence of that for her to start showing genuine interest in Tae-woon as a person.

The scenes featuring Tae-woon and Ji-na are genuinely heartfelt, even if sometimes they seem awkward or silly- because this is the kind of person Tae-woon is, and Ji-na is slowing learning to appreciate that. The lack of conflict in this context is actually very sweet- because of course from Tae-woon's perspective the real danger is emotional fear, not whatever Hee-cheol is plotting at any given moment.

The script as a whole is definitely working toward this theming as well. A visit to the hospital lets us meet a somewhat unexpected romantic couple who share many of the same traits- how could they have ever gotten together in the first place when they're so obviously different? Well, because that's what love is- accepting another person for their differences, rather than judging them for it.

This is the character journey Ji-na is on right now, and what makes "My Unfortunate Boyfriend" especially wonderful is that she knows this is where she's going, where she has to go. Ji-na is choosing to embrace what she can actually understand on an emotional level. "My Unfortunate Boyfriend" has managed the subtle but impressive feat of giving us characters and goals to seriously root for- but more than that, it has crafted character relationships that work in the moment rather than just potentially. There are a lot of strong points here that work to make this drama a very rewarding experience.