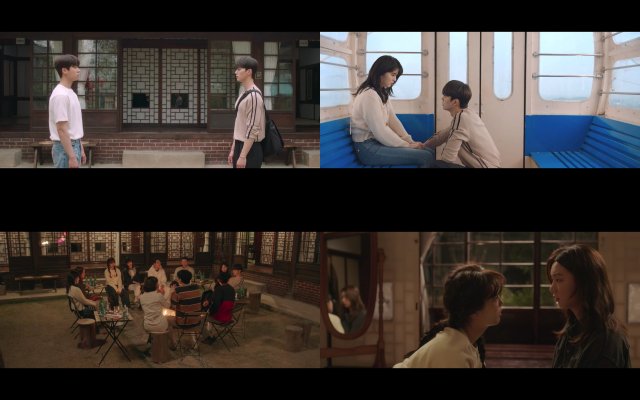 We open up with Gyoo-hyeon glaring at Bit-na, his annoyance at her unwillingness to go public with their relationship at a tipping point. His hostile taciturnity is rendered all the more reasonable by the fact that all the students are having an overnight vacation at Do-hyeok's guest house. This is exactly the kind of situation where Gyoo-hyeon wants to spend time with his girlfriend. So why can't they communicate directly over the subject?

A lack of communication predominates most of this episode of "Nevertheless" with silent glares substituting for actual conversations. This can make the drama difficult to watch although as usual that's the entire point. The whole title of "Nevertheless" indicates that Na-bi is unwilling to to change her behavior despite the fact that she knows its toxic, and not really good for her in the long term.

And in this case Na-bi can't even be faulted for giving Jae-eon the silent treatment because of course Jae-eon wants to talk. This isn't because he wants to communicate but because Jae-eon believes that he can get back into Na-bi's good graces with his usual romantic prattle. Jae-eon's words are a good example of how someone can tell the truth without being sincere. Yes, Jae-eon really does want to be with Na-bi. But he still doesn't want to do anything about the issues that made her split off from him.

And it's not just those interpersonal issues either, it's Jae-eon's whole manner. At one point at the guest house party, reference is made to Jae-eon acquiring a new target. The phrasing is horribly ominous in spite of the fact that in context it's supposed to signify that Jae-eon is an attractive guy. The description from episodes past of Jae-eon being disliked by his male classmates, the ones who actually interact with him on a regular basis, remains relevant as his female classmates continue to be his hype women.

In other subplots, I find that despite Ji-wan being incredibly annoying she's actually a surprisingly cute character due to her dogged attempts to be as sincere as possible. Ji-wan seems a little too old to be a lesbian schoolgirl although there's no other way to describe her attitude. And of course, Sol is incredibly patient with her despite the fact that at this point Sol must surely understand that Ji-wan's clingy behavior is due to her having a romantic crush on Sol. "Nevertheless" Sol tries to avoid addressing the issue.