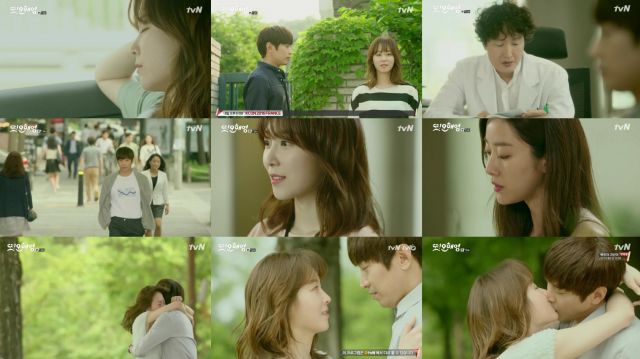 The last we saw of Do-kyeong, he was fervently racing to solve the great mistake of letting Hae-young go. Most of the tension this episode revolves around the horrifying possibility that their relationship has been overrated. Do-kyeong and Hae-young were just never meant to be. It's more of the usual from "Oh Hae-Young Again" in terms of frightening relatability, since in every break-up anywhere, it's only really over when both parties finally decide to give up.

And what makes a person give up on what they think may be love? Mostly just looking foolish. Do-kyeong's personality is not well-suited to submissive gestures. It's a struggle for him to act concilatory with Hae-young, and nearly every such attempt Do-kyeong makes here involves unnatural behavior that comes off as less than persuasive. So it's suitable the episode is building up overall to the moment when Do-kyeong snaps, finally acting like his real self again.

That much, I think, illustrates the difference between a relationship that a person wants to continue out of inertia and one one that genuinely has a life of its own. Look at Tae-jin and the other Hae-young, and the desire to get back together with their formally engaged partners mostly just amounts to returning to a life of known comfort. But knowing that you love a person isn't the same as really knowing anything about them, and it's the latter quality that "Oh Hae-Young Again" has always prioritized.

While that's all strong material as usual, I really must take issue with the whole "Jun shows Hi-ran his script" storyline. Mostly I've just gotten uncomfortable with the way Hi-ran dresses at meetings that are obviously intended to be semi-formal rather than dates. This episode is the first time I can remember the drama actually commenting on Hi-ran's wardrobe, and while the first joke with Hae-young was kind of cute, everything afterward was just awkward and weird.

And not the good kind of awkward and weird like what we've come to expect from Soo-kyeong. The poor pitiful woman asks for advice from the only source she can think of, which just goes to show how low she's gone. And yet there's Jin-sang, always at the wrong place at the right time when inspiration hits. It's very sweet how Jin-sang is consistently able to show Soo-kyeong he cares about her in pretty much the most inappropriate way possible. I really do hope that plotline works out. Sure, Jin-sang is kind of a creep. But at least he's not married.