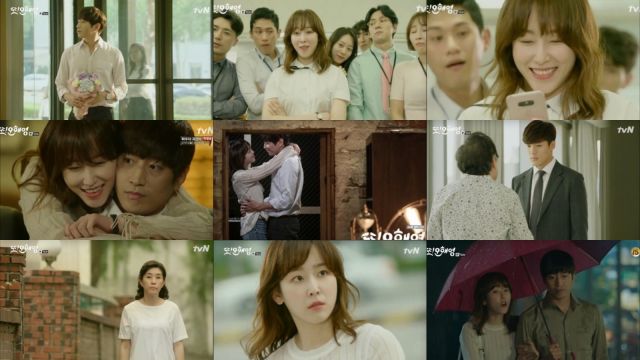 To my great surprise, "Oh Hae-Young Again" actually does a really good job putting on the brakes and going "whoa now, looks like we need more episodes". Rumination is the order of the day, as characters ponder over whether or not they can really get a happy ending just by thinking happy thoughts. As it turns out Hae-young and Do-kyeong still have a lot of wreckage from past experiences floating around, and it's going to take more than a gentle push to solve these problems.

The good news? Hae-young and Do-kyeong have a genuinely strong bond. If one of them has a tough day, they can get reassurance from the other. The other Hae-young has largely disappeared as a factor in the story mainly because Hae-young and Do-kyeong aren't letting symbolic issues bother them anymore. Even bearing in mind that more tangible threats exist, the other Hae-young has been such a huge stumbling block for both of them that this qualifies as a serious accomplishment.

One such threat is Tae-jin, whose eye-for-an-eye mentality is technically no different from Do-kyeong's earlier in the drama. But Tae-jin is going into vengeance mode with his eyes wide open whereas Do-kyeong was blinded by drunken grief. Hae-young's take-down of Tae-jin as a character is brutal, unrelenting, and well-deserved. And in tough contrast to her takedowns of Do-kyeong, there's no real exit path for Tae-jin except to admit that Hae-young is right. There's precious little evidence he ever really cared about her.

Ji-an also returns, mainly as a destructive force against Hae-young and Do-kyeong, but more subtly as a thematic obstacle for Soo-kyeong, whose storyline with Jin-sang is legitimately heart-pounding. I think it bears repeating- her "raise the child overseas" idea is really stupid, and I'm going to be upset if there's a timeskip indicating that she did that and it worked. Soo-kyeong's only model for a maternal figure is Ji-an and time and again we see that Ji-an is pretty much the worst possible person for this role.

Yet at the same time, Soo-kyeong is completely correct in her assessment of Jin-sang's shortcomings. What's more, Kim Ji-suk is excellent as a guy who is legitimately terrified of making huge life changes, especially when they involve a woman as intimidating as Soo-kyeong. This makes for a much more poignant and realistic personal struggle when it comes to modern relationships. Although really, across the board that's always been the main big strength of "Oh Hae-Young Again".