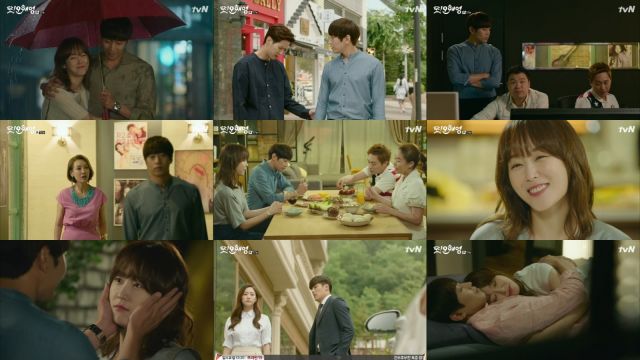 While "Oh Hae-Young Again" continues to mostly be filler, at this point it's surprisingly comforting filler. I like watching Do-kyeong and Hae-young be happy. Eric Mun and Seo Hyun-jin have really good cute chemistry. I like how Hae-young is most of the things that Do-kyeong is not, that she is loud and proud while he is quiet and loyal. Do-kyeong engages in an act of explicit heroism this episode and doesn't even bother to stick around and take credit.

Which leads me to the main character arc that's been easy to forget about- Tae-jin. While the other Hae-young has been defined by inherently fraudulent personal relationships, Tae-jin has been defined by inherently fraudulent professional relationships. This is actually really bad- like, even worse than it sounds, because Tae-jin has been led to believe that Do-kyeong is the bogeyman who ruined his life. In reality it's the people Tae-jin has thought he could trust that betrayed him, and encouraged Tae-jin to think otherwise.

From this light even Tae-jin's possessive behavior regarding Hae-young is somewhat sympathetic, because she was the only person he could have talked to about this. Key word there being "was". Considering how attentive Hae-young is regarding Do-kyeong's problems here, I think it's safe to say that Hae-young may well have been able to rescue Tae-jin too if only he had realized relationships were a two-way street. It's not just that he protects her. She has to protect him, too.

Elsewhere the Soo-kyeong/Jin-sang storyline winds down in a rather more clichéd fashion than I was expecting. I would complain except that the whole elevator sequence is so funny it's hard to wish for it not to have happened. The plotline also manages the impressive feat of giving Hoon something useful to do. And of course, there's Jin-sang's heartfelt sadness about the emptiness of the party life now that he can't hang out with his best friends on the off nights.

Those are the real common, best core values that define "Oh Hae-Young Again"- friendship and general compassion, even when it comes to the little stuff like scenes between co-workers where they express genuine personal interest and enjoyment regarding each other's happiness. Compared to that, I've never really been all that invested in Do-kyeong's visions and I'm still not at all sure on a logical level what they're even supposed to be. But they work on the metaphorical level, and that's what's more important anyway.