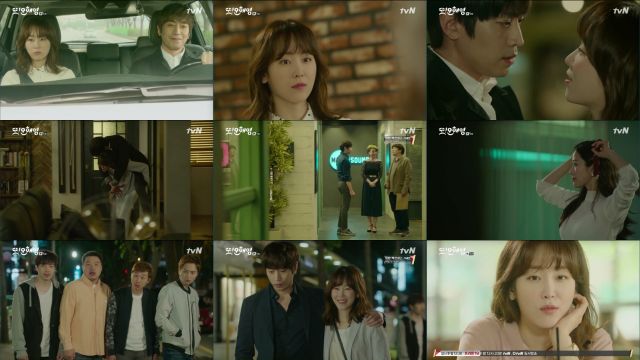 I really love how every single interaction between Hae-young and Do-kyeong, whether it be comedic, serious or awkward, works as a metaphor for their relationship as a whole. The opening scene manages to transition between all three in short order with each one being equally natural. Hae-young really is a positive influence on Do-kyeong, in that her ability to suffer through embarassing indignities prevents him from getting too hung up on his own personal issues.

The other Hae-young, by contrast...well, an early internal reflection scene finally reveals the other Hae-young's true character. She's completely oblivious to how other people react to her presence. It's an imminently irritating character trait that's no doubt the consequence of the other Hae-young having spent her whole life being treated as the greatest person in existence by pretty much everyone. The other Hae-young is genuinely incapable of processing the idea that someone else could not be happy to see her.

Do-kyeong really speaks for everyone when he finally uses his fists to unambiguously express his incredible anger. Hae-young gets another good moment later on when she finally snaps at the other Hae-young's nice behavior. And of course gets a reprimand for being "rude". "Oh Hae-Young Again" is really a good test case on how irrelevant social norms can be depending on the person. Because she's bubbly and attractive, the other Hae-young is quite literally incapable of acting rude since no one is willing to perceive her as such.

"Oh Hae-Young Again" also manages to be repetitive and annoying in a good way, bizarre though that may sound, by constantly repeating the "ha ha there are two Oh Hae-Young's" joke until Hae-young is at a complete breaking point. It's really not that funny a joke. If the production team thought it was half as clever as the other Hae-young does "Oh Hae-Young Again" would be among the most unbearably obnoxious dramas on television.

Instead we get subtler stuff. In Korean, "Oh Hae", when pronounced without a breathing space, means "misunderstanding". Frequently Hae-young is addressed by her full name without a breathing space. This makes it sound like she's being attacked as the jerk who doesn't understand or appreciate the situation. Or maybe that's just what it sounds like to my foreign ear, I don't know. What I do know is that the scheme Hae-young comes up with to finally get back at the other Hae-young's ineffable politeness is just...so...perfect. Wrong, sure, but it's not like doing things the right way works for Ms. Misunderstanding.