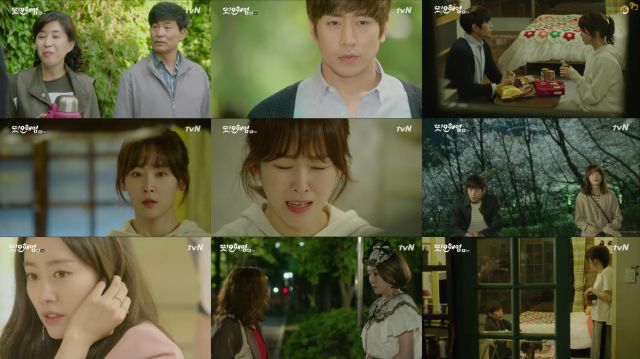 Where did Seo Hyun-jin get those ridiculous glasses? They're so dorky and cute. That's just another one of the little touches that make "Oh Hae-Young Again" a lot of fun to watch. Every seemingly irrelevant detail appears perfectly calculated to bring out the most attractive character traits. Even the other Hae-young gets the rock climbing scene, which makes her look incredibly cool even as I continue to struggle with how we're supposed to interpret her character.

She's always a useful comparison point. This episode's confrontation with Do-kyeong has her once again fail to grasp why it is that Do-kyeong is so upset to see her, and the other Hae-young also manages to make matters worse by making a lot of self-centered assumptions which mostly just serve to aggravate Do-kyeong even further. The other Hae-young is very bad at demonstrating genuine contrition. Her tone makes it seem like she's come back for her selfish own interests rather than Do-kyeong's.

We do finally get some context as to why the other Hae-young disappeared without explanation, although I found these scenes oddly unsatisfying. As is to be expected the context is incomplete, although that bothers me less as does the tone shift. For several scene "Oh Hae-Young Again" feels less like itself and more like a goofy daily soap opera where personalities can change drastically when one character meets another character that they sufficiently hate.

I'd call that cartoonish but in all fairness most of the supporting characters in "Oh Hae-Young Again" are cartoonish, it's just that their often silly attitudes are well disguised. Soo-kyeong's fantasies demonstrate how desperately she needs a boyfriend, Hae-young's parents are snoopy and also apparently make weird noises. Hoon consistently manages to act even more childish than his doll-faced girlfriend. Hi-ran (played by Ha Si-eun) is, of Hae-young's many life contacts, probably the most normal. She even has her own life, apparently.

Of course Hae-young herself is no poster child for normalcy. Back to that comparison point- what does Hae-young do when she's mad? She throws rocks. Of all Do-kyeong's premonitions I find it funny that this one seems to bother him the least, because Do-kyeong himself is no stranger to anger, and what with his tendency toward punching things, he can hardly fault Hae-young for expressing herself in such an unambiguous way. Which oddly enough is what makes their ultimate reconciliation so believable. Premonition or not, Do-kyeong knows how to communicate with the new Hae-young.