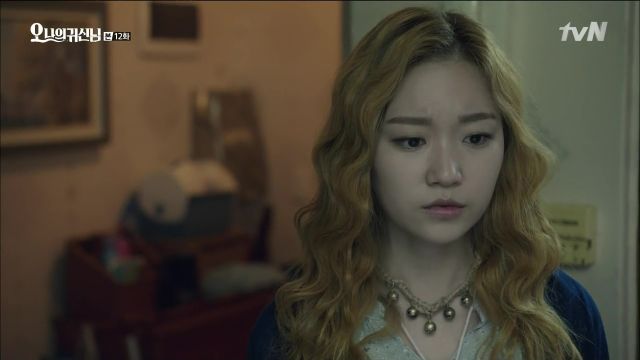 Several key plot threads come to a head in this exquisitely timed episode of "Oh My Ghostess". The acting in this is superlative on the parts of the three leads and the terrifying villain. All elements came together in one of the most emotional episodes thus far that highlights the mystery, the love, and the innermost fears of our beloved characters.

Seon-woo is opening up in a way he has never been able to because of the love he feels . Jo Jung-suk gives him the carefree innocence of a man in love. The character-writing is strong and down to earth. Seon-woo doesn't lose his arrogance, but he clearly qualifies it with a his consideration for Bong-seon, a happiness for her when she achieves personal success. He's always been mindful of others, but now he is more open with it and is able to reveal his inner feelings in a way that was stifled with his difficult childhood.

The changes in Seon-woo are also reflected in Bong-seon. She is now able to urge herself to confidence, allowing herself to feel whatever she feels rather than hiding behind a mask of shriveled propriety. That confidence knocks the evil spirits away as well as allows her to actualize the potential that Seon-woo (and others) see in her. It gives her the strength to tell Seon-woo the truth about herself: she's not bipolar she's the earthly host of a very bubbly ghost. It's a testament to Park Bo-young and Jo Jung-suk that the bulk of the confession scene is shot in silence, only revealing their expressions that tell everything that needs to be known. She is pouring out her heart and while he hurts for her, he is immensely confused and perturbed by her confession.

While Bong-seon has grown, she still suffers from low self-esteem, only in her case it's a very reasonable fear that she faces: she's afraid Seon-woo loves Soon-ae and not her. It's such a pivotal moment for her that mirrors the crisis points in many of our lives. It also mirrors the moment in Soon-ae's life that happens almost simultaneously when she realizes that she has to forgo her heavenly ascension to protect Bong-seon. It shows that she is more than just her sadness and jealousy. She's putting herself in peril to help her friend avoid almost certain death at the hands of the spirit possessed Seong-jae.

Seong-jae is one of the weaker points of "Oh My Ghostess". While Lim Ju-hwan is most certainly a terrifying and blood-chilling villain and the filming of his heinous deeds as disembodied hands or feet traversing a foul path towards cruel intentions is cleverly wrought, his development has been decidedly underwhelming. We've only attained insight into his behavior in the latter half of the drama and we know virtually nothing about the real Sung-jae who the evil spirit has possessed. It would be good to flesh out Eun-hee and her marriage with Sung-jae as well in order to really make him more than just a knife-wielding, creeptastic stalker of the night.

"Oh My Ghostess" doesn't forget the little things, like including workplace drama with a comedic flare that enhances the main plotline. The cooks in Seon-woo's kitchen are fun and diverse, filling out the show nicely.

However, comedy and romance is not the direction of the drama now; it is discovering the truth, preventing a murder, and resolving the strange relationship between man, woman, and ghost.