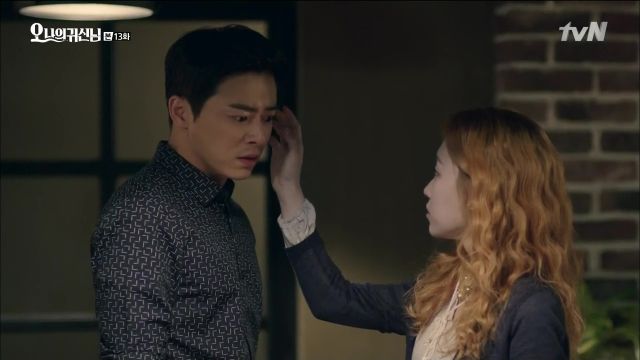 This was the episode of truth-fueled angst that required Seon-woo and Bong-seon to run through a gamut of emotions both together and alone. Every relationship suffers growing pains, especially when a difficult truth is revealed and feels more like a wedge inserted than one removed.

Bong-seon has revealed her biggest secret and it is one that is difficult for Seon-woo to stomach . We watch him wrestle with the truth and what it means to him, and also what it means to be alone. This kind of detailed character development is what makes "Oh My Ghostess" a special drama. Yes, the fun of Soon-ae chasing Seon-woo is wonderful as is the sigh-inducing romance, but it is how the pressures and joys of living and being with people mold and shape the people (and ghosts) in this drama that make it worth the watch. Seon-woo angsts and aches while Bong-seon regrets and Soon-ae feels guilt. But it's easy to see their pain in our own lives. It's so clearly conveyed in the writing, filming, and acting.

The camera work is clever, showing only the backs of Seon-woo and Bong-seon as they begin their largest fight to date. Then it pans around to angled views of their faces as the realization that there is true discord between them comes to light. So. Cool. Other examples are rampant, but this was one that caught my attention in particular.

As the episode unfolds, Seon-woo learns that he and Bong-seon are more alike in both their childhoods, but also in that they have carried torches for each other for longer than either knew. Those similarities have been hinted at from the beginning - the groundwork had been laid, which is often an element missing in live filming. Desperation for ratings often batters logic and planning in plotlines to a pulp, but that isn't so here. The friendship between Soon-ae and Bong-seon is so deep seated that not even anger or jealousy can ruin their touching honesty and how they work together to overcome. Similarly, Seon-woo's kitchen family, despite complaining and goofy antics, sticks by him when he's at his lowest. Even silly Min-soo can see his boss is hurting and with the others make attempts to cheer up Seon-woo.

Soon-ae is reaching the end of her time, but still she delves into the mystery that is Soon-jae and his evil intentions. She is hurt by Seon-woo's fear of her ghostly existence, and still she is able to come to the conclusion that her virginity isn't her grudge. It was an enlightened moment for her that was beautifully underplayed both in its location in the episodes run time and by Kim Seul-gi. It's something we all knew and a fact that she had to discover herself. She did because she has grown up. Like her younger brother Kyeong-mo who has fallen in love with Bong-seon and learned to think of someone other than himself. Even a small side character has made a leap forward.

Still, Seong-jae and Eun-hee could use more development. She was having trouble getting pregnant, and that was dropped. We know little about Seong-jae save for the fact that he is possessed by pure evil. We need more than that.

Until we get that, we still have the sweetness between Seon-woo and Bong-seon, the kind born of pure adoration, respect, friendship, and effort to make a relationship work.