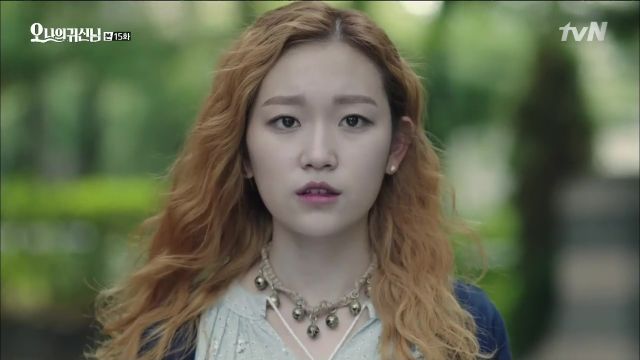 There is some major action in the penultimate episode of "Oh My Ghostess" and that action brings the show into darker territory. While it has been hinted at that Soon-ae's demise was not a pleasant one, to see it was appropriately gruesome and shocking.

Episode 15 primarily focused on the chase between Soon-ae and possessed Sung-jae. Their darkly entwined history was the focus of events and the evil spirit that possessed Seong-jae did his worst as he struggled to remain free and powerful. Character development took a back seat to the action that forced the confrontation between Soon-ae and her murderer. While the action was exciting, the lack of light in the scenes detracted from the events on screen because those events were very difficult to see.

The real Sung-jae partially came to light in this episode. Unless other possession victims, he seems to have been aware during parts of his possession, enjoying his marriage and his friendships. I wished, as I have for many episodes, that we got to know Sung-jae and his story much better. His end was heart wrenching, especially as he took his own life to end the evil spirit, but to know him better would've strengthened the impact of that end. Sung-jae was not a perfect man, but he was a perfect vessel for evil, hurt and full of rage. It would've been nice had his involvement in the evil spirit's actions been clarified and vice versa. But they had been one for so long, perhaps the line had blurred. Since the clarification didn't come, and most likely won't in this last episode, we have to make do with the noble death he choose as redemption.

As for Soon-ae, watching her come to terms with her very sudden and violent death was a highlight of the episode. She realizes her true grudge and Seobingo, like an older sister, helps her work through it and find an end to it. Because of Soon-ae, Seobingo helps someone not only for money, but because it's the right thing to do. Soon-ae has been similarly giving of herself in order to help Bong-seon, her truest friend in death. Both ghosts and people are learning to be selfless.

The heaviness of all the action was countered by the levity of a reversed status situation at the restaurant. Min-soo the sous chef is always lording over the others, but in a big reveal that was only a surprise to him he becomes the youngest, and therefore the least powerful in terms of age status. The other poke fun at him and the humor is a much needed respite to the kidnapping of Bong-seon and Sung-jae's dire situation as a man possessed and whose life has been lived in a grey area.

A few little things made me appreciate the episode despite the lack of character development. First, Seon-woo actually took it upon himself to look for Bong-seon and didn't just use his phone to get things done as so often is the case with successful men in K-drama. Also, he pulled Bong-seon out of traffic before comforting her, an action also often overlooked in K-drama.

The finale looms near and we have only a few things to wrap up. Onwards!