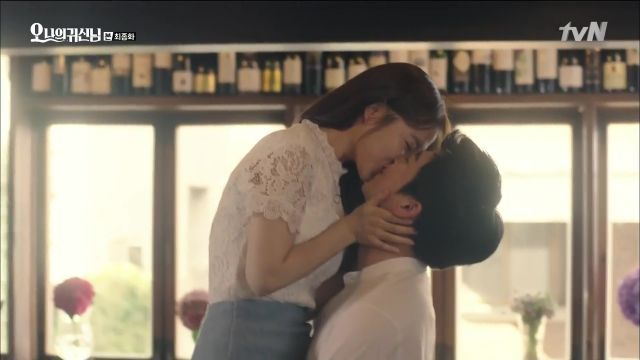 The finale of "Oh My Ghostess" was all about goodbyes and seeing what our characters have learned since the start of their adventures. Soon-ae's departure was the heart of the episode and was handled beautifully in all of its facets. It captured the essence of the drama and helped it earn a place in the annals of drama history.

Overall, "Oh My Ghostess" was a strong drama with a powerful cast, an intriguing storyline, and substantial character growth from start to finish. There are, of course, flaws such as inconsistency in ghost rules and a lack of true understanding of the otherworld that prevents a deep empathy for the mysterious, possessed Sung-jae and a keener understanding of Soon-ae's issues. Or, a neglect of Eun-hee's character throughout the run of the drama so that her final moments of screen time weren't as effective as they could've been. In the finale, the show resorted to an unnecessary time jump, a jarring resurrection of Sung-jae's character, and a strange pairing of So-hyung with a man who looks exactly like her dead husband. There were also a few strange scene cuts that were the result of a lack of time in production.

What went well was how the show realized the imprint that Soon-ae left on the living and how the living allowed her to leave in peace. Seobingo the Shaman was an older sister to Soon-ae and their relationship was strong and full of support often seen portrayed only between family members or lovers. Seobingo's role also took a step beyond the normal ajumma role, a role for middle-aged women. She was a well-rounded woman with clear flaws and strengths, who learned to listen to her conscience and made friends with Soon-ae despite Seobingo's inclination to avoid her. Stepping away from stereotypical roles is always welcome in drama since the K-drama industry thrives on formula and expectation. Lee Jeong-eun as Seobingo was wonderfully nuanced and fit seamlessly with the younger cast members.

Soon-ae's goodbyes were the focal point of the episode because they were the end of her early journey and her way of sending off her friends to their futures. She left Seobingo, her partner and sister with a new empathy for ghosts. She left her friend Beon-seon with a new appreciation for herself and her self-worth, and also with a man in her life. She helped Seon-woo discover the truth behind his sister's crippling accident, and also helped him win over his insecurities and snag Bong-seon. She left her father and brother with a new outlook on life and both men truly restarted their lives and began to look forward, rather than wallow in the past. "Oh My Ghostess" is about how Soon-ae grew her family as a ghostess and used love and friendship to connect people. More than love, it is about family, like the constantly bickering kitchen of chefs who stuck together through thick and thin. And about how that family helped Soon-ae grow up as well. Her goodbye with Seon-woo was especially telling - he said her name and acknowledged her for herself, the woman, not the sex-crazed ghost.

Bong-seon and Seon-woo were also strong characters brilliantly played by the emotional powerhouse Jo Jung-suk and infinitely adorable Park Bo-young. The writing of the characters was strong and clear, especially in that the two are more than lovers: they are friends and confidents, two people who became family. The chemistry between the actors magnified the clever writing. I would've liked to have seen more of Bong-seon in the beginning, but the nature of ghost possession (and the dubious rules behind ghost possession) didn't allow for that. In the end, she learned to love herself and that opened her up to being loved by Seon-woo.

Despite its weaknesses, "Oh My Ghostess" did what any self-respecting K-drama should do: it thoroughly entertained. The characters learned and grew. The side characters humored and worked the appropriate amount of feels. The villain was terrifying. The friendships and romances were touching and fulfilling. The presence of Soon-ae in the lives of the characters left a deep impression and made these characters into better people because of her earthly life. And she left us (with a few tears in our eyes) peacefully and to a better place. Luckily, we can rewatch "Oh My Ghostess" if ever we miss her.