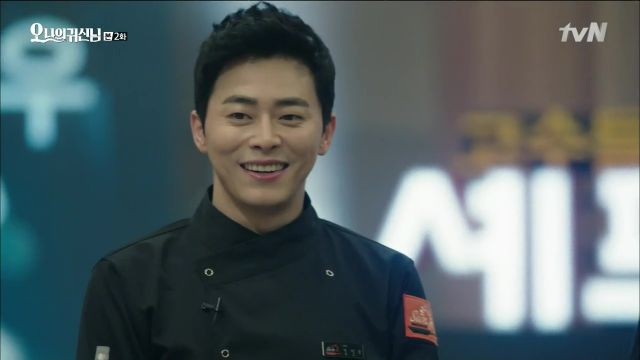 Episode 2 of "Oh My Ghostess" is just beyond the threshold of setup and jumping into new material and the transition is flawless. The story is propelled forward by compelling characters and a self-driven story. Each main character has their own history to contend with and their own present that troubles them. What "Oh My Ghostess" excels at is merging their worlds.

The loss of Bong-seon the tired girl as she is overtaken by ghostess Soon-ae is the only downside of the ghost possession . Bong-seon was well laid out in the first episode so we know that she has an interesting relationship with Sun-woo in that he truly can relate to her. We also see how hard life is due to her supernatural senses. The story turns to sex-crazy Soon-ae who makes quite the impression on the viral young men in Bong-seon's workplace. The one hundred and eighty degree change in personality makes for wickedly funny sexual innuendo that is only made possible because this show is on cable. The change also seems to win over her co-workers who did not know how to relate to Bong-seon before. I wonder what changes that will bring in Bong-seon once she comes back.

Soon-ae, like policeman Choi Seong-jae, has been undeveloped until this point. Seong-jae gets little more insight than the first episode, but Soon-ae is the lucky receiver of a slow buildup to realization: she discovers her name and the story of her past that have both been lost to her for a year. Park Bo-young has been remarkable at handling the contrasting personalities of Bong-seon and Soon-ae.

"Oh My Ghostess" gives the chef's in Seon-woo's kitchen their own stories, however small, and distinct personalities that gives Soon-ae a lot to get used to - especially Seon-woo's prickly personality. What is great about Seon-woo is he is only prickly on the outside, and we learn that it is for very good reason, one very similar to Bong-seon's. He complains about a stray, but kindly cares for him. He acts like he doesn't care about Bong-seon, but he empathizes with her more than she knew. He has a strained relationship with the mother we are also getting to know and a good friendship with the sister who works with him.

"Oh My Ghostess" is just starting out, but I already can't wait to see what lies ahead.