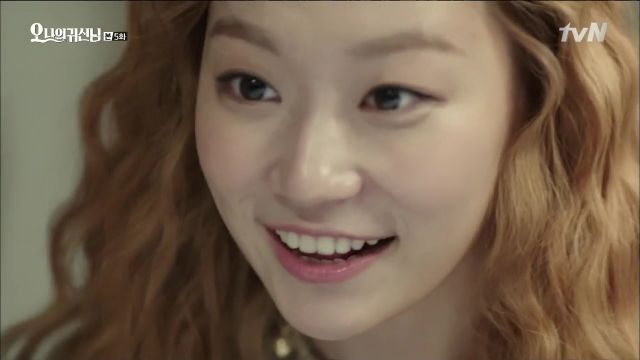 As many laughs as the past four episodes have given us, episode five of "Oh My Ghostess" gives us just as much heart. We get our timid heroine back and watch her struggle through her reality: she's lost two weeks and feels more lost than ever.

This episode is a testament to Park Bo-young's acting as she reverts to Bong-seon and gives us further insight into the terrified young woman . It can especially be seen in contrast with Kim Seul-gi's ghost beside her and how well Park imitated Kim's energetic approach to Soon-ae. Character-wise, Bong-seon is developed and we see why she's is exhausted, shy, and terrified. Everywhere she looks there are ghosts plaguing her. She's terrified to lose herself when possessed, and to be seen as not herself. In a figurative sense, this is a fear many suffer, the fear of being misunderstood. Because of Bong-seon's ability to see ghosts, that fear is magnified. But we also see that there is more to her than her fear. She is a creative, kind soul who enjoys the little things in life.

While we learned about Bong-seon, we grew with Soon-ae. The wayward ghostess believes her virginity to be the cause of her inability to move beyond. The events of the episode suggest that it is something deeper: concern for her family, for her exhausted father and aimless brother. Soon-ae's becomes more than a sex-crazed ghost intent on losing her virginity and moving beyond. She rediscovers her humanity in her love and concern for her family and in her need for them. Her family is also still in need of her, missing her and creating such wonderful character beats as ghostess Soon-ae and living father mourn their mutual loss side-by-side without being able to truly connect. It is family that drives Soon-ae, and the mysterious cause of her death.

Soon-ae is not the only ghost possessing people, or so the hints in the plot suggest. Policeman Choi Sung-jae's behavior borders on sociopathic in its cruelty and shaman Seobingo gets the mysterious impression that he's there, but not quite there - the statement reminds me of Bong-seon's situation. It wouldn't be all that strange to have another ghost possession. In fact, it would be a wicked plot twist to have an evil ghost in the mix.

A small detail that fills out "Oh My Ghostess" is the fact that they show the creative cooking process at Seon-woo's restaurant. We see him and Bong-seon and the staff in their elements as they prepare food for others to enjoy and take nourishment from - this is a particular joy of both Seon-woo and Bong-seon.

One emotional aspect made clear this episode is how Seon-woo feels about Bong-soon as herself, the shy, stuttering woman. He worries and frets over her and reverts into his unguarded persona - a shy man with bravado only used to protect his fragile ego. He shows her kindness upon kindness while trying to hide beneath a transparent veil of machismo. This kind of emotion doesn't develop overnight and we see there is a connection that extends beyond Soon-ae's possession. It was helped by the possession in that Seon-woo is more forthcoming with Bong-seon despite all of his blustering. I love the roundabout ways in which they connect: through her blog, listening to music.

Not only do all these character developments happen, but the mysteries continue to unfold. Why is Soon-ae a ghost, really? How did she die? How will Bong-seon and Soon-ae deal with their individual lives when forced together? Will Seon-woo gain true confidence and happiness? Will Soon-ae and Bong-seon really start to understand each other? Let's find out. Onto episode six.

16 episodes - Fri, Sat 20:30
Also known as "Oh My Ghost"
Synopsis
A romantic comedy drama about Na Bong-seon who is possessed by a ghost and chef Kang Seon-woo who doesn't believe in ghosts.