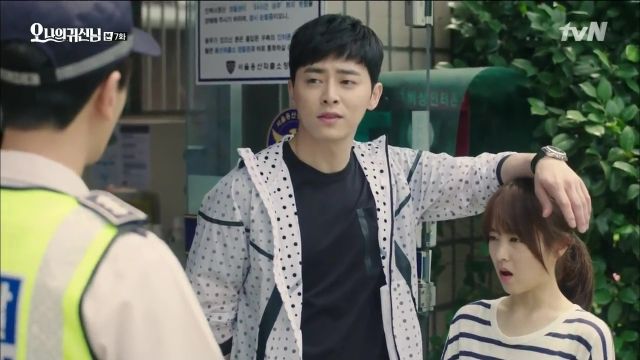 "Oh My Ghostess" is reaching its midway point and a storm is definitely brewing. Bong-seon and Soon-ae have finally talked, which changes the game entirely. They know each other's situations. Hopefully others, like Soon-ae's father and Seon-woo, will be let in on the supernatural secret as well.

The pressing matter is Soon-ae's tether of time . She only has a couple months before she turns into an evil spirit. To avoid losing herself to malicious energy she can either allow Seobingo to perform an extremely painful funeral right or satisfy her virginal grudge. As the time grows short, Soon-ae gets more desperate and terrifying glimpses of her future as an evil spirit make themselves known. She wrestles with the fear of the pain of passing over and the fear of losing herself as an evil spirit. The change in her is evident and terrifying. That change brings out a motherly instinct in the previously only money-hungry Seobingo. The empathy further humanizes ghostess Soon-ae.

Soon-ae's family took a backseat in this episode as her primary dilemma played out. Still, they were not forgotten and they are now privy to the strangeness of a girl literally possessed - Bong-seon does not know them, and that was disconcerting for them. It starts Soon-ae's father thinking; I look forward to seeing what comes of that.

The bulk of the episode focused on the slowly budding romance and friendship between Seon-woo and Bong-seon. Although Soon-ae did prime the canvas, it is Bong-seon's natural eagerness to learn, and her appreciation of learning and Seon-woo's giftedness that attracts him most. The more charming he finds her, the more comfortable she is with him. They are a good pair, bringing out the best in each other. Seon-woo's teenaged methods of flirting (like literally flashing her his biceps) work on Bong-seon who truly does admire him. With her he feels genuinely appreciated; with him, she feels genuinely cared for. People need that in life; Soon-ae needs it in death.

The use of split screen to share moments they both enjoy together, although in separate locations is a conventional technique, but here is inspired. The use of So-hyeong to make Bong-seon jealous and insecure was contrived. It was not unexpected because the groundwork had been laid, and women do tend to get jealous when they realize the object of their affections is about to be stolen away. I still hate it though. Luckily it was realistically done.

Relationships have been grounded, Sung-jae is still hunting for something (but what?), and Soon-ae's mystery has yet to be uncovered. The next episode is the turning point of the drama and I can't way to see what surprises are thrown our way.