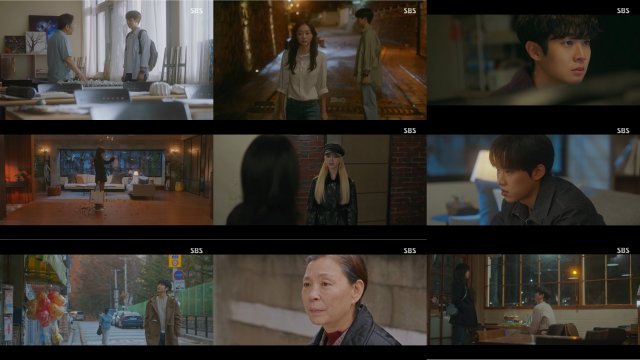 A scandal threatens to engulf Woong and NJ, as pictures of the two at a cafe together have gone viral. Almost nothing actually emerges from this plot hook. From Woong's perspective pretty much nothing happens at all. NJ gets agitated at a manager for acting like it's such a big deal, when it's not. That's pretty much it. Another barely developed conflict is almost immediately defused, all so we can go back to the leads being passive-aggressive.

I don't think all dramas necessarily have to be high intensity all the time. Be that as it may, "Our Beloved Summer" is deliberately pointless with its plotting, nearly all of which is incredibly avoidant when it comes to having any of the lead characters actually interact with each other. Ji-woong gets taken out for a birthday dinner with his staff, separating so thoroughly from both of these leads I was once again left wondering why he's even in the story at all.

It doesn't help that we're constantly told that Ji-woong has been in love with Yeon-soo this entire time, without ever being given a clear explanation as to how or why. At least NJ has a clear role in the narrative. She's an alternative to Yeon-soo who Woong's decision to reject suggests that he still has feelings for Yeon-soo. At this point I don't see how Ji-woong's feelings could possibly impact the story. Simply saying them at this point would be callous on his part.

And even Woong and Yeon-soo themselves share surprisingly little screentime. There's a whole bizarre comedy of errors where Yeon-soo buys far too many jujubes. Then later Woong tries to draw some of the jujubes. Their unwillingness to just talk to each other and hash out their feelings is terribly frustrating. Woong almost manages to have a long enough conversation with Yeon-soo's grandmother to find out why she broke up with him, but they never get that far into specifics.

Then there's the epilogue. The flashback, or at least I think it's a flashback, shows that Yeon-soo knew that Woong had abandonment issues. This makes the way she broke up with him needlessly cruel. Really, I dread this entire new plot point in general. Screenwriter Lee Na-eun-I has so quickly lost interest in every other plot point in this drama I can't imagine this one will wrap up in a satisfactory manner. Even the stupid subplot about the dog solves itself without explanation.