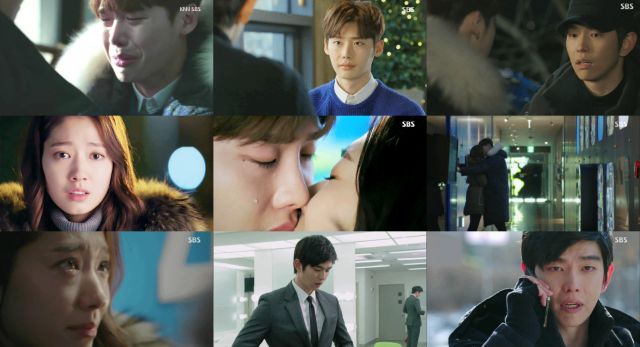 The pacing continues to be slow here. We still don't find out what Jae-myeong's plan actually is- mostly to drive up interest for the next episode, where it should be displayed in full, clear detail. For the most part this is just a negotiation- Jae-myeong tries to convince Dal-po that they need to follow through on revenge, however unpleasant the prospect may be. Well, technically he's trying to convince Ha-myeong. Therein lies the conflict. To which name does our character owe more loyalty- Dal-po or Ha-myeong?

It's not really a direct conflict, because the two personalities aren't at war with each other or anything. But as has been noted even by characters inside the drama, Dal-po has been awfully chummy with In-ha given that they work for rival news organizations. In-ha directly confronts that fact this episode, ultimately moving Dal-po to make his decision independently of concern for her. As cute as their romance may be, it's never really been the main emotional focus of "Pinocchio".

Well, for me anyway. I've been more into the whole discussion of journalism ethics. Journalism ethics, romance, and revenge have been the three main thematic points of "Pinocchio", but so far they haven't really worked well in concert with each other. It would be quite easy to produce three separate dramas about all these separate storylines and they would probably work about as well as they do in "Pinocchio".

Lack of intersection notwithstanding, all the individual portions of "Pinocchio" are very well filmed and acted. While the characters are frequently acting out multiple roles (very literally in the case of Dal-po), the characterization remains consistent throughout. The trouble is that the emotional hits only really work on one level. The discussions between Jae-myeong and Dal-po about whether or not revenge is justified are all the more heartbreaking because, as the flashbacks indicate, Jae-myeong actually has the better argument here. All the same, that's only really a good hit on the level of the revenge storyline.

But I don't really want to nitpick here. A hit is a hit. They don't all have to be epic punches for a drama to be enjoyable. In any case the last few episodes have mostly been about anticipation and build-up. If "Pinocchio" has been trying to build up excitement for the next episode, where the situation is finally going to devolve into an all-out journalistic brawl, all I can say is it better deliver. The elements are definitely here, so my expectations are pretty high.