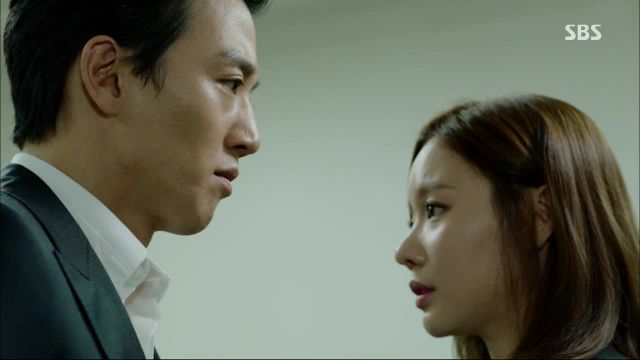 The first episode of "Punch - Drama" began solidly by giving us a main character, Park Jung-hwan (Kim Rae-won) who is more of a villain than a hero. In fact, he is all villain. He sacrifices everything that makes him human in order to gain what he desires. He is the lapdog of a corrupted, twisted, powerful politician and he knows it. His updstanding ex-wife knows it. The question is, how is his cancer diagnosis going to factor into "Punch - Drama"? Currently, it could take him out and the world would be better for it.

Writing this strongly built first episode is Park Kyeong-soo ("Empire of Gold"",THE CHASER - Drama") who penned solid characters and plenty of mystery. Who is Jung-hwan and how did he turn into such a vile man when he once was wed to a woman as sweet as Ha-kyeong? The set-up around his character's mystery and the twisted fabric he is apart of is ingenious.

Director Lee Myeong-woo ("Fashion King", "Warrior Baek Dong-soo") tastefully films the episode without too much lingering on faces, thereby forcing the emotions from his characters and scenes. He has a firm grasp on action as shown by the out-of-control bus scene at the beginning. The crash was sequenced for maximum impact while still giving strong tastes of the major characters involved: Sin Ha-kyeong (Kim Ah-joong), her daughter Park Ye-rin (Kim Ji-young-III), and the bus driver. It takes but a moment to convey a necessary emotion and Director Lee uses each moment wisely. So many dramas waste screen time. "Punch - Drama" hasn't wasted a second of its first hour.

Kim Rae-won as the main man of the hour (he cannot be called a hero), Park Jung-hwan, is full of emotion and yet is surprising as Jung-hwan chooses the darkest path at every fork in the road. Kim doesn't play him coldly. Rather, the man is full of energy waiting to burst, like he has too much to say and is using everything in him to keep silent. He loves his child, but is willing to overlook a bus accident that could've killed her in favor of supporting Prosecutor Lee Tae-joon (Cho Jae-hyun) who is running for Prosecutor General. Until we find out why Jung-hwan is willing to give up and compromise everything, his riveting character and solid acting will tide us over.

As his counter is the magnetic Kim Ah-joong playing Sin Ha-kyeong, mother of their child and an honest prosecutor. Kim Ah-joong is as inspiring as Kim Rae-wan is chilling. Her character fights the good fight for her daughter and the bus driver (who was at the wheel when Ye-rin's faulty bus crashed) who is wrongly accused of drunk driving. The character is white to Jung-hwan's black. They were once a couple, which speaks of a rich, dark history that lead to their subsequent break-up and Jung-hwan's very bold jaunt to the dark side.

Jo Hae-hyeon as Lee Tae-joon, the corrupt politician who has Jung-hwan at his beck-and-call is a combination of perfectly slimy, acerbically clever, and, on a single occasion, pitiable as a wet puppy. The rest of the cast is equally as sharp, including the child actors who are unknowingly drawn into the dangerous world in which adults play.