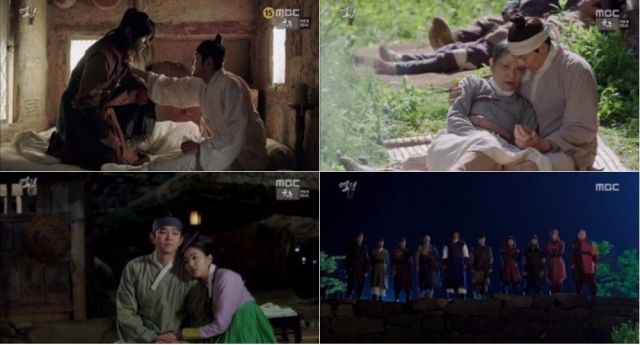 In a peculiar twist, it turns out that Gil-dong and friends did not, in fact, achieve even cursory reforms as a part of a a settlement when they beat King Yeonsangun's army in direct combat. All they got was...I guess some sort of license to continue wandering around the countryside beating up corrupt nobles without anyone interfering. Beyond that, the final episode mainly goes into the various fates of the characters aligned with King Yeonsangun.

The fates of all the villains are fairly logical and even thematically consistent considering what "Rebel: Thief Who Stole the People" was aiming for. I just find it a little weird that in the end, it's the villains and only the villains who have the character traits necessary for their ending to have much meaning. Gil-dong's side, their motivation was always just to help out Gil-dong and fight injustice.

Consider Nok-soo, her love of art, and the sad realization in her final days that art simply doesn't matter all that much. King Yeonsangun suffers such a crisis of confidence he becomes increasingly obsessed with art to the point he no longer seems a functional monarch at all. Other characters meant well, yet are so overwhelmed by the sheer unpopularity of the royalists that we watch them take a look at their own lives and realize that wow, it really was all for nothing.

This is why the implication of the end, with Gil-dong and friends fighting injustice into perpetuity, is actually oddly appropriate. None of the villains who got serious screen time in "Rebel: Thief Who Stole the People" were really that big a problem. The abusive nobles, like the one Amogae killed way back when, they were the ones making life miserable for everyone in the lower classes out of sheer spite. Gil-dong's simplistic brute force solution could never really alter that destiny.

So it is that the happy ending of "Rebel: Thief Who Stole the People" is actually kind of sad when you think about it. It's fitting considering that half the drama has been swashbuckling action and the other half is essentially just a tragedy about the governors being unable to find common ground with the ones they rule, and destroying themselves by forming a coalition where the leader calling all the shots is probably mentally ill. On their own these stories could have been good, even great. But together the overall effect is just kind of weird.