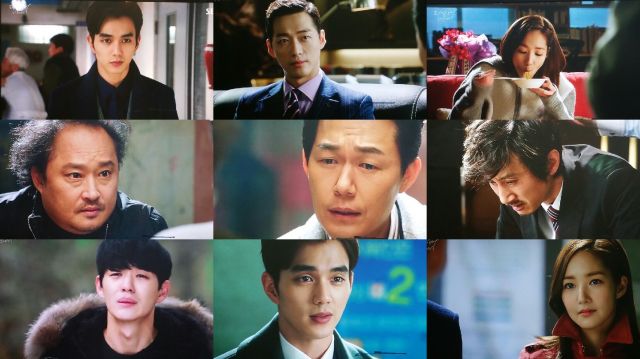 After taking a moment to remind us that Jin-woo is still grieving, "Remember" proceeds to demonstrate why Jae-hyeok's culpability as a convicted murderer actually creates as many problems as it solves for the villains. See, now that Jin-woo has no hope of saving his father, that means there's nothing stopping him from eliminating as many people on his list in the short term as possible. They were only ever useful to the extent they could exonerate Jae-hyeok. Now they're just enemies.

There really is a kind fof sadistic glee in the way Jin-woo goes about obliterating his enemies. Director Lee Chang-min-I definitely knows how to put the revenge in revenge drama. Jin-woo doesn't even wipe all these guys out right away. It's clear that in the immediate sense he just wants to watch them squirm. And also probably fall on the wrong side of the corporate conspiracy again, so no fun times for anyone pretty much.

Once the revenge is dealt with Jin-woo then has to move on to an ethical question. Do he and his lawyer team focus on the mysterious circumstances regarding the death of the original murder victim's father's death several episodes ago, or do they take on a new case that will probably annoy the corporate conspiracy in the short term but lacks long-term staying power? Given that there's still several episodes of "Remember" left, naturally it's the latter case.

I was fairly surprised at the temporary case because it was an unusually logical litigation that one would expect a corporate conspiracy to actually be involved. Although this much is not really worth overthinking. Whatever specific form the case takes the dramatic beats are all the same. There's more parallelism as Jin-woo shamefacedly realizes that his actions are making him resemble Dong-ho, whereas Jin-woo prefers to wallow in the tears and the melodrama in order to achieve his goal.

As I've mentioned before "Remember" is a very repetitive drama- a fact that becomes all the more clear when we see what pops up in the preview. What keeps the drama exciting is that the plot consistently moves at such a ridiculously fast clip it feels more like we're jumping into an entirely new story rather than rehashing old ones. Observe how even though a month of time passes in this episode, rather than showing us this with a boring subtitle, "Remember" demonstrates the passage of time by having Jin-woo take pot shots at several different antagonists in quick succession. That's a whole lotta revenge.