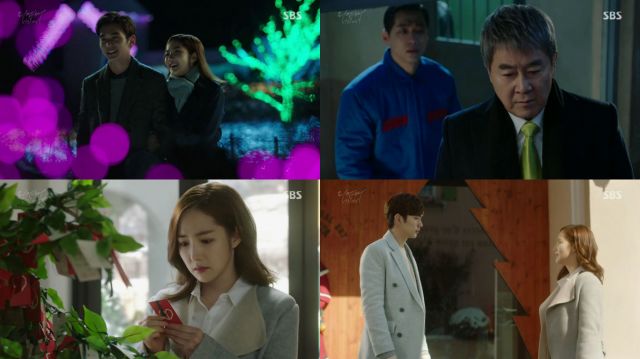 There's two essential parts to the final episode of "Remember"- gratifying revenge and sadness. The sadness actually ends up coming from an unexpected angle, though. While Jin-woo's loss of memory is not glossed over or dismissed in any way, this material ends up being covered relatively shortly in the ending. Instead, we're left with grief at how everything managed to turn out so poorly, thus necessitating the elaborate revenge scheme.

It's an interesting direction for the story to take, because in many ways the conclusion of "Remember" undercuts the drama's own strong points. Gyoo-man keeps melting down and melting down here, slowly coming to realize that in his current situation, there's not going to be any rescue. Gyoo-man has to suffer from his own lack of social skills, and even if it's easy enough to blame his dad for that, there's something almost tragic about seeing the monster get his just desserts.

And where does that leave Jin-woo? Sure it's been fun showing up every so often delivering bad news to the latest villain. A last-minute attempt to try to save Gyoo-man on a technicality fails, of course, because Jin-woo has figured out every possible trick the corporate conspiracy has. If it's up to In-ah to finish the job, that's fine too. But in the end Jin-woo is mostly just satisfied that the trials and tribulations are over, while the people he has worked with have been influenced for the better.

That's about where my thinking is when it comes to "Remember" as a whole. While it's easy enough to attack the drama for its occasionally absurd clichés, the performances consistently showed a lot of passion. Namgoong Min shows surprising depth here as a psychopath who has, well, who doesn't really have any depth. Without the family name Gyoo-man is nothing. More than the legal incarceration, Gyoo-man losing his father is the more ironic, spiritual death which shows how little a person he is compared to Jin-woo.

Because that's where Jin-woo's strength was. Gyoo-man lived in the moment and didn't care who he hurt in the process. Jin-woo made a point of trying to create good memories while he still had the chance. Even if in the immediate sense Jin-woo enjoyed his bit of righteous sadism maybe a little too much, he was never fighting for those moments of ecstasy. Jin-woo was fighting for his father, and his friends. What more could any decent person hope for?