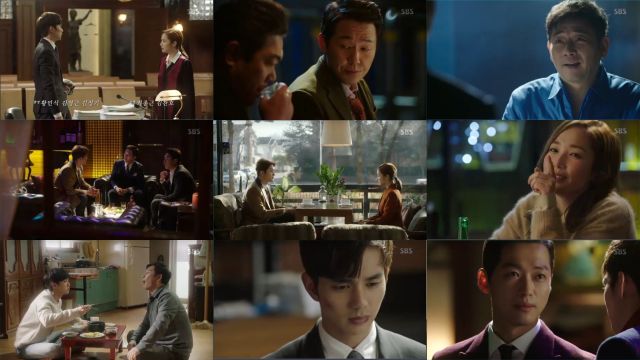 When last we left off Jin-woo was impeaching the credibility of an alleged sexual assault victim by bringing up a past boyfriend...no, don't go, hard as it may be to imagine "Remember" does manage to deal with this subject matter tactfully. Mainly because the direction clearly indicates that the basic thrust of Jin-woo's argument is in fact fairly scummy. Even bearing in mind that the guy is probably innocent it's hard to imagine a woman willing to go this far out on the basis of sheer spite.

No, naturally it turns out this was all the fault of the vast corporate conspiracy. As comically elaborate as the frame-up job is I do appreciate that "Remember" acknowledges the outrageous complexity. Jin-woo's ultimate argument rightly ends up sounding completely crazy- that is, until he uncovers the one contradiction in the evidence that can't be easily explained. In-ah's explanation isn't really all that satisfying, because what kind of drunk would go to the trouble?

In-ah's character is interesting here less because she does anything important but rather because in two scenes she demonstrates the difference in effect between indignance and personal appeal. Getting all righteously outraged at Jin-woo for hitting below the belt? Really not that effective, and borderline melodramatic. Expressing disappointment in Jin-woo for choosing be overly confrontational even with people obviously care about him? Well...that one actually kind of hurts.

Jin-woo went from high school student to law school graduate in four years. Clearly the young man has dedication and determination. Yet at the same time he seems to lack people skills and much in the way of common sense. Note how Jin-woo ends up picking a fight with Dong-ho for no good reason- the scene in question has no effect on the grand courtroom climax. I'm not expecting Jin-woo to be buddies with Dong-ho- I don't especially like the guy either right now. Jin-woo needs to learn to pick his battles.

...Notwithstanding the fact that he won this one, I guess. I liked this episode much better than I was expecting given that the last two were such a disappointment, but it remains to be seen what specific storytelling tact "Remember" is going to take from here on out. I'm actually hoping for some paternal conflict myself. Observe how Il-ho is learning, evidently to his irritation, that Gyoo-man learned exactly all the wrong lessons from Il-ho's big fatherly intervention four years ago.