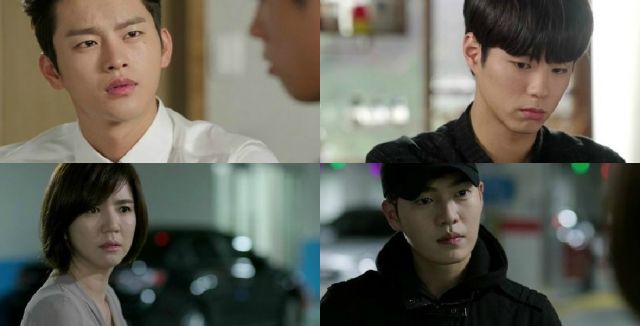 The walls seem to be closing in on Joon-young. And yet the man himself doesn't even seem to notice what's happening. Or maybe he just doesn't care. It's hard to tell the difference. Joon-young doesn't act like a man who literally knows everything that happens at every time. Even his internal monologues have less to do with actually killing people and more to do with motivation. Which, as per usual, is totally incomprehensible yet weirdly logical at the same time.

What can I write as far as that goes? Choi Won-young is really nailing the role here. What makes Joon-young such an intriguing character is that he's obviously mastered the first rule of proper sociopathy. Just because Joon-young doesn't understand how emotions work doesn't mean that he doesn't understand emotions. Joon-young knows what it's like to be a kid in a world where no one even pretends to care. So consequently, it comes as little surprise that Joon-young is able to milk that advantage for all that it's worth.

The only weakness in his overall plan is that Seon-ho does, in fact, no know what it's like to have a family member express genuine love. Seon-ho's father may not have been great, and his brother may have still been too much of a child to offer much in the way of serious assistance, but even so. The trace memory remains, and "Remember You" has done excellent work showing us how the brothers of the past relate to the brothers of the present day.

The main larger conflict is how and under what circumstances evidence can be acquired to arrest Joon-young. Even though this episode fills in a lot of the gaps it's difficult to see the overall picture. For a thriller like "Remember You" that's a very good effect to have- even though the characters act like in they're in an elaborate logical chess match time and again the most touching moments with Hyeon are the ones where he's willing to admit to having more of a soft side.

It's still not a very strong soft side but again, that's what keeps the performances compelling- there aren't any abrupt character transitions, no one has started acting stupidly just to move the plot forward. To the contrary, the main immediate threat to Joon-young is wiped out here precisely because of Joon-yeong's strengths more than the fallen character's weaknesses. The overall message is a clear one- Joon-young can't be beaten by his own game. But given how he understands the rules, it might be possible to make him give up.