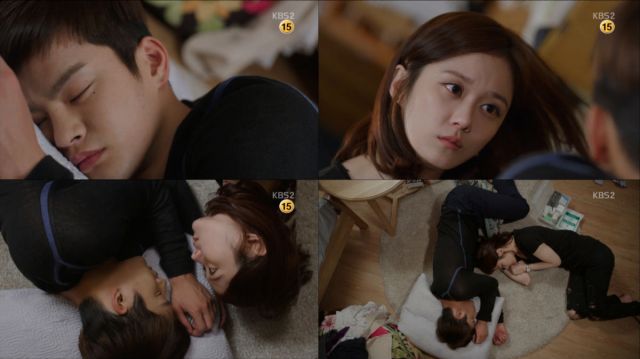 Ji-an and Hyeon continue their secret investigation. This entire plotline invokes a lot of ambivalent feelings for me. On one end, it's wrong for Hyeon to hide from the police. On the other end Hyeon is fairly obviously doing this simply because it's more fun to work against the police than it is to work with them. Considering how easily bamboozled they are it's hard to blame him. Ji-an delivers a plausible explanation in a very implausible way and her co-workers still don't bother to question it.

"Remember You" sounds a lot more fun in recap form than I remember it being when I actually watched the episode. Everything about the drama seems really strong but there's just something missing- maybe serious dramatic impact. When the full background of the case is unveiled there's not really much in the way of emotional reaction. There's just a sense of, gosh, it sure sucks to be a member of this family.

...Which is actually fairly appropriate if we think of the drama from Hyeon's point of view. The parallel drawn up by the end is a fitting one. By any logical measure, the experiences Hyeon went through as a child should have scarred him emotionally somehow, yet here he is as a fully functional adult solving mysteries and not even feeling the slightest bit guilty about messing around with the cops. At best we just get a slightly bemused expression from the man as Hyeon wonders just why it is that Ji-an puts up with his ridiculous behavior.

That bigger mystery regarding Ji-an is also unveiled, for what it's worth. And that portion of the story reveals one of the finer subtler points of "Remember You"- that the bad guys don't have a scorched earth policy when it comes to crime. This is something that's bugged me about Joon-yeong from the beginning. The man never seemed all that dangerous, even though he obviously was. I don't think it's any coincidence that Seon-ho exhibits the same kind of behavior.

This is probably the real perplexing part about "Remember You", is that how competent a character is appears to be directly disproportional to how genuinely interested they are in committing or solving crime. The structure of the story remains perfectly consistent and yet...well, some things just can't be quantified. In any case, "Remember You" definitely leaves a fairly good aftertaste upon watching, and if that's all I get from this drama, that's good enough for me.