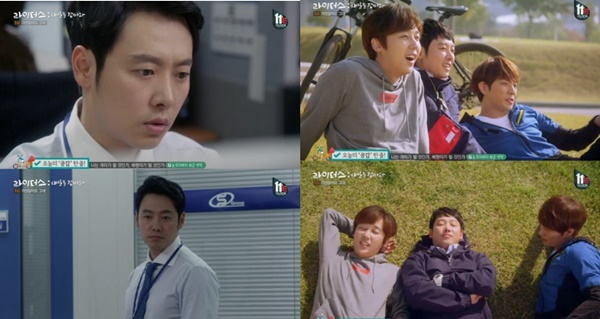 Gi-joon (played by Kim Dong-wook), Yoon-jae (played by Choi Min-I), and Joon-wook (played by Yoon Joong-hoon) are all pushing thirty but they stubbornly refuse to grow up. The three of them still take their bikes out to the river and check out all the foxy ladies. Because what else are they going to go do with their lives? The job market stinks, and the occasional fantasy is about the only thing keeping these guys sane. That, and their ability to vent to friends about the often absurd problems common in their employment situations.

Yoon-jae, for example, is forced to care for dogs, and ends up getting into arguments about whether "son of a bitch" is a technically a swear when used to refer to a dog. Not that Yoon-jae would ever quit the dog racket, because that's his best chance to meet foxy ladies while wearing his fabulous trenchcoat. No amount of handsomeness can compensate, by the way, for such a ridiculous fashion choice. 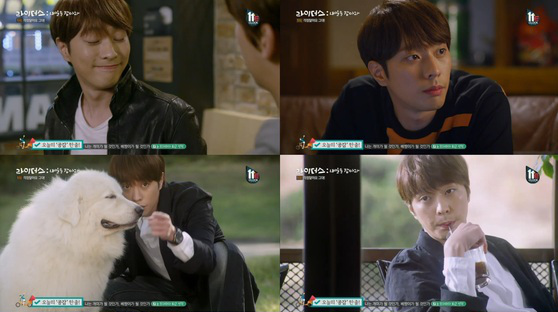 Joon-wook, by contrast, dreams of getting into the corporate racket. He encourages himself in this endeavor by constantly comparing the various employees of these workplaces with insects. This sounds like an analogy "Awl" might have used at some point, except than in "Awl", the intent of the comparison would be to insult the system, not provide some sort of means of getting inside it.

"Riders: Get Tomorrow" is a very colorful drama- for the sake of comedy. The situations themselves are ridiculous and relatable, and when they aren't the production team throws in a bunch of animated visuals to sell the point even further. Its characters are sympathetic, but mainly they're just pathetic. It's not even necessarily their own fault, though because aside from bicycles and checking out foxy ladies none of these guys are even that good at anything.

...Which brings us to Gi-joon, who has this crazy idea to design the ultimate rickshaw, finally giving him and his friends a job they might actually be good at that. Given what "Riders: Get Tomorrow" has shown us so far, it seems unlikely that this plan will actually work. And yet I do want these guys to succeed. In general I really want "Riders: Get Tomorrow" to succeed. It's hard to dislike a drama that takes a popular meet cute romantic comedy trope and then proceed to completely trash the concept by having a character point out how blatantly self-serving it is to act like that in real life.