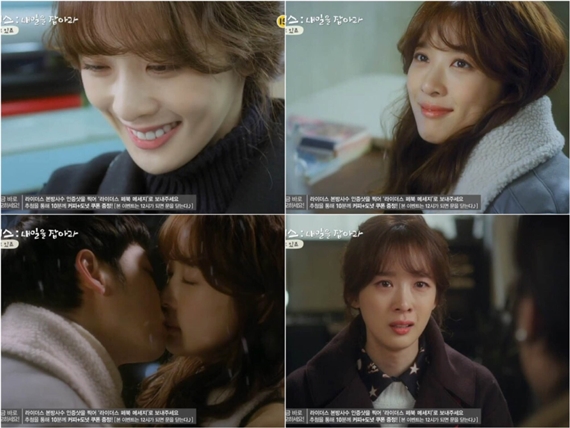 As meditation on how different personality types tend to gravitate toward completely different styles of romantic relationships, "Riders: Get Tomorrow" actually has a fair amount of interesting material. Up until now I always thought that Gi-joon was just kind of a creep when it comes to romance, but as we see with his mother this episode, Gi-joon does have a decent excuse for being clueless. The poor guy's used to seeing women in an adversarial light. Even when they seem nice they're probably being sneaky somehow.

I also found myself rather sympathetic to Mi-ram's situation, as a woman with the exact opposite problem. She really has no idea how to turn a guy down, even when she obviously wants to. I have to give Mi-ram credit for at least having the sense to give mixed signals rather than positive ones. Even so, Mi-ram's situation really does suck all around and makes for a pretty good argument as to why breaking up after a long-term relationship really necessitates a serious break from dating in general to go along with it.

With the last couple, Yoon-jae and Tae-ra, there's this sense of flirty aggressiveness that never really gets turned off. It's the main thing Yoon-jae and Tae-ra have in common and it does make sense, thinking back, that these two would first seriously meet as a part of a presumed one-night-stand. That personality type in general is the tone that's best suited to one-night-stands. I'm not sure the rest of us are any more capable of that kind of behavior than the rest of the cast is.

So, what's going on with the rickshaws this episode? Not very much I'm afraid. Although at this point I have mostly stopped paying attention to Gi-joon's business model. Writer Park Sang-hee confused me in the earlier episodes by offering lots of technical information on start-ups only to abruptly stop discussing the topic. Although I see much better now that the rickshaws were only ever really a means to an end- getting all these characters in the same place.

The real important conflict when it comes to the rickshaws is to the extent that Gi-joon has to fight with his mother about career and personal decisions. It's a decent conflict, actually, I was just caught a little off guard because it's not the kind of subject you'd expect from a cable drama. Credit given where it's due though- Kil Hae-yeon is icy and cruel in a way that would be very much in place on a daytime Korean soap opera.