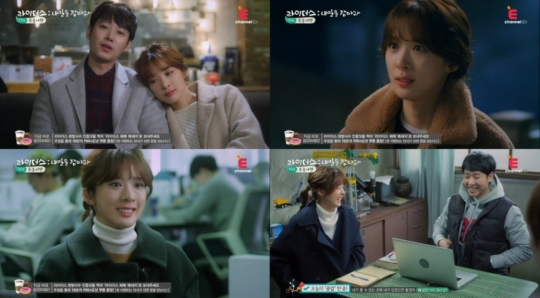 While the characterization in "Riders: Get Tomorrow" can be interesting, from a certain perspective, at the end of the day this is still a drama that requires the pretense of a plot. And that's where the conflict is ending up in preparation for the last episode. The rickshaw company has to struggle with financial backing, and once this problem is identified, the rest of the runtime is spent not quite solving it. Incidentally, don't watch the preview. It (probably) spoils the ultimate resolution.

The focus on romance over the last few episodes has been nice, and I liked those moments here too. Even so, the lack of any real relation of the romantic subplots to the rickshaw company plot is rather glaring. The big moment where Tae-ra is about to leave is undercut by the fact that she even can leave. She doesn't seem that important to the rickshaw company in part because it seems like they already have too many employees and should probably cut some out to make ends meet.

By the way, Gi-joon's mom is still a jerk. Not really much more than that, although this episode does continue the trend of writer Park Sang-hee always sticking the best jokes in the epilogue. I do laugh every so often at "Riders: Get Tomorrow", but it's always more at the nature of the set-ups than anything that was intentionally supposed to be funny. Apparently, for example, Gi-joon has a dad. Joon-wook's comment regarding the wedding dress was also funny because in context that's such an irrelevant point to bring up.

Elsewhere the perfect story construction is what ends up being kind of a letdown, because the construction is in itself so obviously devises with screenwriting considerations in mind. Consider how So-dam gets an actual good job offer this episode from a company with more need for a graphic designer than a rickshaw company. There is of course a condition, a condition that doesn't really make sense given how this kind of work is usually done over computers, but it's setting up a conflict.

In terms of weak compliments that's the main impression I got coming from this episode of "Riders: Get Tomorrow". The production isn't really being bad in any explicit way, but it's not knocking my socks off either. A lot of this is just the fault of the poorly conceived foundational basis of the story, which has always just been a mish-mash of late twenty-somethings, romance, and rickshaws. While easy enough to market, that much alone doesn't give "Riders: Get Tomorrow" substance.