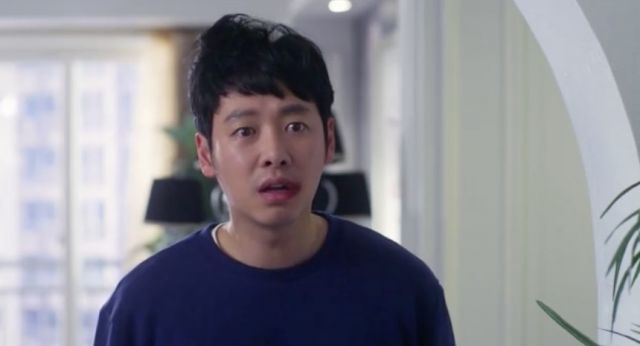 Writer Park Sang-hee is attempting the very awkward balancing act right now of trying to make "Riders: Get Tomorrow" seem like a cathartic tale of woe for the younger generation while not really moving very quickly to get on to the premise. Joon-wook failed his examination to get the corporate job. The situation is legitimately a pretty big disappointment but "Riders: Get Tomorrow" undercuts itself by having the other two male leads act like, well, act like jerks.

All right, mostly it's Gi-jeon that acts like a jerk. Yoon-jae at least tries to avoid starting a fight, even if he's not very good at it. But Gi-jeon is the one with the whole ultimate rickshaw plan, and it's kind of hard to want the guy to succeed when he practically gets up in Joon-wook's face and says that his dream was terrible and stupid. I mean yeah while Joon-wook's dream kind of was terrible and stupid he did have other concerns. Like how how his girlfriend would react.

I do like Eun-joo (played by Mi-ram). She's cute and funny. But more importantly Eun-joo has a fairly transparent motivation. She wants to get married to her boyfriend. And Eun-joo's whole scene with Joon-wook is adorably sad and bittersweet because of course it's more sensible for her to think that as a guy, Joon-wook is just too dumb to be thinking about stuff like marriage. To the contrary- as much as Joon-wook likes suits it's pretty clear that a major part of his disappointment is that he feels like by failing the exam he let Eun-joo down.

Unfortunately that's very little plot, even though this is about all we get. The cliffhanger this episode is quite literally the preview from the last episode. I hate it when dramas do that. That's about the surest possible way to make me feel like I've wasted my time watching an episode. Although really, I might just be more annoyed that Choi Yeo-jin apparently plays a major character in "Riders: Get Tomorrow" yet has no characterization or even screentime until near the end of the episode.

I'd like to note as a final dubious honor that "Riders: Get Tomorrow" appears to be pioneering a new form of revenue development- random ads in the corner of the screen every so often. I'm not sure yet whether this is as annoying as it sounds. What I can state very definitely is that the degree to which I'm annoyed by the ads is directly proportional to how bored I am by the actual drama, and this episode was a fairly dull one.