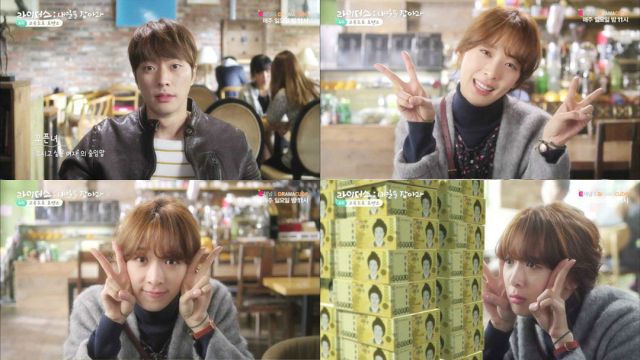 I swear that writer Park Sang-hee must have a bet with someone, somewhere to see how slowly she can pace this drama's writing. I can't come up with any other explanation for why it takes so long "Riders: Get Tomorrow" to set up the most rudimentary plot points. How is it possible that it's taken four episodes for Gi-joon to have anything resembling an actual conversation So-dam, his presumed love interest? What has the drama even been doing with itself up until this point?

Well, in all fairness it's possible that So-dam is actually Yoon-jae's love interest. It's kind of difficult to tell because it seems like Tae-ra is Yoon-jae's love interest but she doesn't act like it. Incidentally, we find out this episode what Tae-ra's relationship is to the wide world of cycling and of course, it seems like she would be a good candidate for working for a rickshaw company. Maybe. So far "Riders: Get Tomorrow" is less about cycling and more about rickshaw business models.

The weird thing is that at this point the rickshaw business models are, to me, the most interesting part of the drama because rickshaw business models are not something I've ever put that much thought into. Gi-joon is asking questions that most people never do, so the answers actually end up being fairly interesting. I like that Gi-joon has a ridiculous dream and gosh darn it, he's going to find some way to make it work.

Compare that to much more tired material like So-dam asking Yoon-jae for a loan to deal with legal expenses. I mean for pity's sake, why is this still a plot point? So-dam could just claim that she was acting in self-defense after having just been groped. This is exactly the kind of case the cops don't like to bother themselves with, because the easiest solution by far would be to just have both parties go home and forget that they ever even met each other.

The bigger crime "Riders: Get Tomorrow" commits right now, is simply that it's boring. I can tolerate a fair amount of bad writing logic if it at least gives the actors a chance to put out interesting performances but right now the drama isn't even getting us that much. I'm legitimately unsure what the point of "Riders: Get Tomorrow" is even supposed to be right now, and I'm starting to worry that the drama's going to practically end before we get to any of the interesting rickshaw stuff.