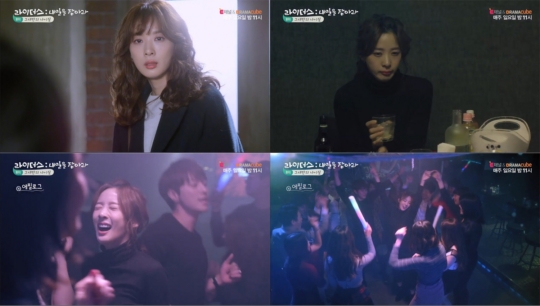 In this episode "Riders: Get Tomorrow" explores what it means for someone to be a bad friend, and somewhat incidentally a bad employee. Yoon-jae broke off an appointment with Tae-ra to go out with So-dam instead. This was a very jerkish thing to do, especially since So-dam's first two choices were also people that Yoon-jae knew. Unlucky for Yoon-hae that he has this tendency to think of every possible encounter as being a date.

...And that's about it really. As usual "Riders: Get Tomorrow" is running around in circles with its own plot, the result being that very little of consequence happens here as all the characters fairly slowly learn that So-dam was not in fact asking Yoon-hae out on a date. Well, we don't actually get that far. For now they're just acting very icy and rude around So-dam without really explaining why, the end result being that So-dam is fairly perplexed by everyone's behavior.

So how about the rickshaw business? Well, it exists as a framing device, and that's about it. There's a special promotional event at Hongdae, and it occurred to me that Hongdae seems like a very bad place to try to manage rickshaws on account of it being so crowded most of the time. Gi-joon must have specifically organized this event to occur at one of the low foot traffic hours- not that I have much idea when that is. I'm not sure I've ever seen anyone try to ride a bike in that neighborhood.

That's the kind of drama "Riders: Get Tomorrow" is. The actual story is so unremarkable that I mostly find myself asking questions about the worldbuilding and production process, because that genuinely tends to be more interesting and engaging. The comedy would normally be able to take up the slack in that department but lately the epilogues are the only part of the drama that make much of an effort when it comes to jokes.

Occasionally the cast is able to manage to get cute sweetness down. I like Joon-wook's meetings with Mi-ram, even if strictly speaking I'm not sure why they're meeting the way they are. I could have sworn that they'd officially broken up and that Mi-ram was dating this other guy now. Once again, though, there really isn't much reward to be had from trying to delve into the inner logic of "Riders: Get Tomorrow". There just isn't a whole lot of substance here.