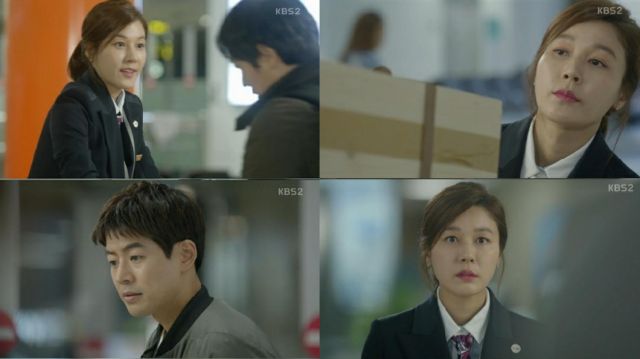 The same visual idea that director Kim Cheol-gyoo use to bring Seoul to life is equally as firmly on display in Jeju, as we're treated to longing sad visages of a landscape that by and large is just a gigantic coastline bounded by a road. That's the one part of Jeju tourism that never shows up in the ads- how inevitably you're going to spend a lot of time on thus bus traveling on obscure roads. Nothing is quite so awful as being stranded that far out. Unless you're Soo-ah, and need the moment of serenity.

The change of serenity really does suit Soo-ah well. Even her new Jeju friends are noteworthy for being, well, Jeju friends. The only people Soo-ah has ever really talked to up until now have been co-workers. This is part of what made Do-woo's presence so sheerly intoxicating. The mere presence of random Jeju wives, however poorly developed they are, do a lot to remind Soo-ah that she is a basically normal person.

Elsewhere, Do-woo struggles to recover from his inevitable separation from Hye-won. No, that's not it. Ultimately Hye-won meant nothing to Do-woo, just as Do-woo meant nothing to Hye-won exept as possible fulfillment of her more utilitarian life goals. More trickling revelations of just how meaningless their relationship was serves to drive Do-woo further into emotional isolation. And that's why again and again he has no choice but to desperately reach out for Soo-ah.

The production team is putting a lot of effort into trying to sell Soo-ah and Do-woo as a character who are destined to be together. Transparent plot contrivances notwithstanding, it really is difficult to explain the powerful longing they feel for each other as anything except fate. Observe how they react when by sheer dumb coincidence Soo-ah and Do-woo see each other, having only just barely missed each other several times. That much is the face of inevitability.

Even when the plot is slow that vibrancy of a sudden, unexpected, deep emotional connection is really hard to shake. Soo-ah and Do-woo as people both have this habit of taking extended, inward reflections through the pace of constant scenery. This undeniable similarity is what consistently keeps managing to drive them together. It's what makes them easy to root for as a couple even if, owing to the primary of other commitments, they're always so very, very slow when it comes to being able to give each other a boost and admit that what they have is real.

"[HanCinema's Drama Review] "Road to the Airport" Episode 11"
by HanCinema is licensed under a Creative Commons Attribution-Share Alike 3.0 Unported License.