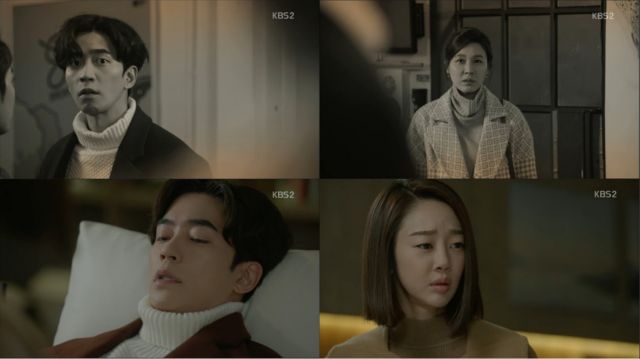 The airport, throughout "Road to the Airport" has been the drama's most consistently powerful yet understated metaphor. Think about it. Why do you go the airport? Because you want to go somewhere else. Everyone in this drama is always jumping on airplanes at a moment's notice precisely because their lives are inherently transient and changing, yet these constant renegotiations are never satisfying. Everyone just ends up trying to leave again out of boredom.

That's the plank by which Jin-seok's character is ultimately resolved. I was genuinely surprised at how impressively his ultimate character psychology broke down. Soo-ah was very much right about how Jin-seok is not, by nature, a violent person. He's just too passive. Passive-aggressive that is. Jin-seok is forced into humility not via humiliation, but from seeing in Soo-ah's eyes that for all practical intents and purposes, acting hostile is not somehow defendable just because you're not physically attacking people.

What is defendable is sincereemotional intimacy and curiousity. For once, Soo-ah and Do-woo just talk, not about whatever awful crisis is promulgating their lives lately, but just the small trivial matters that make up day-to-day life. They talk about these moments to relive that sort of vague pleasantness which makes life generally livable, and put in perspective that with or without each other, Soo-ah and Do-woo will both be all right.

Yet once again the question is broached- what is Soo-ah to Do-woo if they can just give up on each other at a moment's notice? Do-woo ultimately provides an immensely beautiful and poetic answer to this question. In short, it is precisely because of the deeper trust and intimacy that Soo-ah and Do-woo can share those smaller moments. It's why, straight from the beginning, Do-woo was able to expose Soo-ah to the beauty of the city and remind her how even now, in that oppressive environment, there is always the sunrise.

This is the context from which the airport has transformed from a metaphor of escape and loneliness to one of infinite possibility. The characters in "Road to the Airport" are no longer listless. They do not move around at random from impulse, or duty, or emotional outbreak. They move from place to place to admire the different beauties in different parts of the world, and in their lives, while carefully using technology to keep in touch under that all so important understanding that the day will come when they once again meet in person. It's a beautiful message from a beautiful drama.