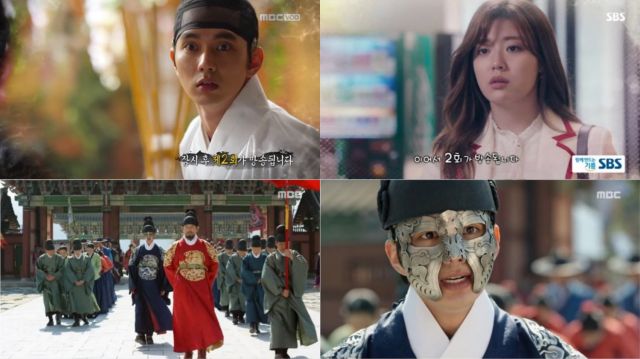 Dae-mok (played by Heo Joon-ho) is the grand wizard of a massive conspiracy. Dae-mok is not literally a wizard, he just seems like one because of his mastery of spooky hallucinogens and a massive spy network capable of making these creepy physical effects pop up out of nowhere. So when Yoon (Kim Myung-soo) makes a deal with Dae-mok to become King, out of sheer paranoia, Yoon ends up forcing his son Seon (played by Yoo Seung-ho) to wear a mask, murdering anyone who sees Seon's face. Then Dae-mok's granddaughter Hwa-goon (played by Yoon So-hee) enters the picture and-

Whoa! I gotta stop with the plot summary. The crazy thing is, that's just the first episode. "Ruler: Master of the Mask" and "Suspicious Partner" are running half hour episodes for some reason but all the same. With all the slow-paced dramas I've been watching lately it's frankly kind of shocking to see the production team for "Ruler: Master of the Mask" get so much exposition out of the way so fast.

So right away, we already have adult versions of the principals. Handsome and smirking as ever, Yoo Seung-ho is great as the rebellious grumpy teenage prince Seon who seriously doesn't get why he has to wear a mask all the time. Even as Seon inhabits this obviously dangerous and horrible world, which is the whole reason he has to wear a mask in the first place, the poor young man is completely clueless about what that danger actually is because his parents really suck at explaining things.

Yoon So-hee as Hwa-goon is also great. Even though Hwa-goon is working for her obviously evil grandfather she, like Seon, is a mere teenager at heart and it's suitably hilarious watching both of them get so easily distracted by the opposite sex. But all it takes is a simple scene transition and whoa, now we're stuck in a chase sequence because Seon lacks an appropriate education when it comes to economic issues in the water market.

The action in "Ruler: Master of the Mask" is chaotic and nuts. There's just enough explanation so that we know what's going on, yet not nearly enough to point to an obvious conflict of resolution. Consequently, the drama has a very manic feel where moment to moment we don't have a clue what will happen next and, predictably enough, the second episode ends on a crazy cliffhanger that leaves us begging for more. Bring it on!